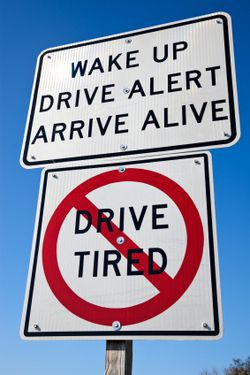 There have been many studies and reports regarding distracted driving, but another very real danger on the road is drowsy driving. Several months ago, comedian Tracy Morgan was critically injured, and another passenger killed, when a tractor-trailer plowed into a limo that Morgan was a passenger in.  The driver of the tractor-trailer that caused the accident had allegedly fallen asleep while driving right before the crash.

The National Highway Traffic Safety Administration (NHTSA) reports that there are more than 100,000 accidents every year that happen because of drowsy driving. At least 1,500 people are killed and another 40,000 people are injured in accidents because a driver falls asleep at the wheel. One out of every six car crashes in which someone is killed is caused by a driver who was too tired and should not have been driving. Most of these accidents happen after midnight and before 8:00 a.m.

When a drowsy person gets in the driver’s seat, their reactions and responses can be similar to a person who is driving drunk. They may suffer from an inability to process information or have lapses in judgment. Their vision may be impaired and they could also struggle with a delay in reaction to situations they encounter on the road. A drowsy driver can also fall into what is referred to as “microsleep” and could drive hundreds of yards in this sleeping state, often at very high speeds.

When a person who is too tired makes the decision to drive their car anyway, they are just as liable in putting other drivers on the road in danger as the person who makes the decision to drive even though they have been drinking alcohol, or the person who is reading and sending text messages while driving. If you have been in an accident caused by the negligent actions of another driver, contact a North Carolina personal injury attorney to find out what compensation you may be entitled to for pain and loss.