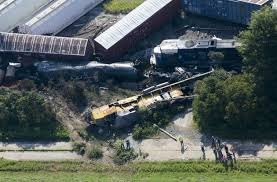 With today’s technology it would be hard to find a new electronic item without GPS. Most new cars have GPS with OnStar, nearly all cell phones have it and now you can even put a GPS tracker on your pet’s collar.  So why do only 1% of railroad trains have GPS?  That is the question being asked after a deadly head-on railroad accident in Lawrence County, Arkansas.  This terrible railroad accident and derailment killed two Union Pacific crew members and two others were injured.  Head-on railroad accidents aren’t isolated to Arkansas.  In 2008, a commuter and freight train collided in Los Angeles killing 25 and injuring another 100.  In 2012 two freight trains collided in the Oklahoma panhandle, killing three crew members.

So where does GPS come into the railroad safety equation?  As experienced Virginia and North Carolina FELA and railroad accident injury attorneys we know that the major railroad companies have been slow to adopt nationally mandated safety requirements.  The rail anti-crash technology, known as Positive Train Control or PTC, is designed to automatically stop a train before it is able to run a red signal or get itself into other dangerous situations. This is an improvement over the signaling systems that are currently in place, which are able to warn train operators of danger, but still allow the possibility of accidents.  The problem is the railroad industry has been resisting the installation of positive train control, PTC, which uses GPS tracking.

The Federal Railroad Administration says the system could prevent 52 accidents a year, ranging from nonfatal rail-yard mishaps to deadly train crashes.  Though some railroad operators have said they will meet the 2015 deadline, including Metrolink and Amtrak, most are asking Congress for an extension. Chicago-based Metra, the second-busiest commuter railroad in the country, has revealed that it is already operating under the assumption that Congress will vote to delay the PTC mandate by three years, meaning compliance will not be required until sometime in 2018.  The Association of American Railroads (AAR) which is the major lobbying arm for Norfolk Southern,CSX and all major railroads has been seeking to delay this much needed safety measure.