How Safe are Electronic Health Records?

Electronic health records (EHRs) and computerized systems were introduced as a way to streamline patient information and reduce medical errors. But information gathered for recent studies have revealed that the rush to utilize these systems have resulted in sometimes tragic consequences.

The baby boy was born 16 weeks premature, but was thriving in the neo-natal unit of the hospital. When he was just over a month old, a pharmacy technician administered a routine IV bag of sodium chloride and calcium. But the technician entered the incorrect amount of sodium – more than sixty times the correct amount. The infant’s body couldn’t handle the dosage and he suffered a heart attack and died.

There has been a push by the government for all medical providers to have shifted to all EHR systems, but neither the government nor the vendors who produce and sell these systems is taking the time to make sure they are functional and safe. There is also no mandatory reporting system in place for adverse events associated with EHRs. And even more disturbing, many health IT vendor agreements have confidentiality clauses prohibiting users from disclosing safety concerns.

Medical information being entered into an EHR. 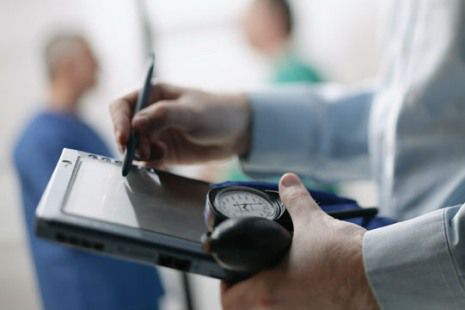 The ECRI Institute, a patient safety organization, received 171 EHR-related adverse reports in a nine week period. Three patient deaths were linked to EHR errors, and eight patients were harmed. Almost 30 percent of the errors were caused by general system malfunctions, such as a nurse not being able to enter treatment instructions into the system because it didn’t allow enough characters. A fourth of the incidents were related to data output problems, including retrieving the wrong patient record because the system didn’t ask the user to validate patient identity. Another 24 percent involved data input mistakes like ordering a test for the wrong patient.

In another study, a review of the Pennsylvania Patient Safety Reporting System found 3,099 EHR-related adverse event reports between June 2004 and May 2012.

Our Virginia medical malpractice lawyers have represented clients who were given incorrect doses of medication. Tragically, some of those incidents were wrongful death cases. If you or a family member has suffered serious side effects caused by a medication error, contact a Virginia personal injury attorney.