When many of us think of auto accident injury claims, we often think it only involves two parties – the injured victim and the driver deemed to be responsible for the car crash. However, a recent lawsuit filed by a West Virginia car crash victim demonstrates how there may be multiple parties responsible for car crash injuries. 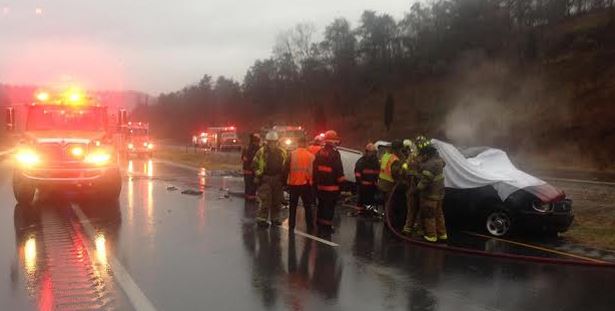 The victim in the case was the only survivor of a horrific crash which occurred in December of 2014. He was one of six people riding in a van on I-77 in the early morning. The group was traveling from Charleston to Wheeling to watch the high school football state championships when the driver of the van, a 46-year-old woman, lost control of the van. The vehicle went off the highway, into the median and smashed into a guardrail. The guardrail failed to stop the van and it continued onto the other side of the highway, directly into the path of an oncoming SUV. The SUV t-boned into the van and this violent impact caused the victim to be thrown from the van.

The van was then engulfed in flames and killed the remaining five occupants inside the vehicle. Victims included the driver and her 15-year-old son, a 48-year-old man, and two 14-year-old boys. The driver of the of the SUV survived the crash.

The car crash victim is suing the estate of the driver for his injuries, alleging that the driver was operating her van in a negligent manner. However, he has also named those responsible for the manufacturing and installation of the guardrail which failed to stop the van from crossing onto the opposite side of the highway and crashing into the SUV.

According to investigators, there had been six straight days of rain prior to the crash and this caused the ground around the guardrail to become saturated and the poles which support the guardrail cable could not handle the impact of the van.

The lawsuit names the paving company and the contracting company as responsible because they were negligent in the installation of the guardrail. It also seeks damages from the steel company which manufactures the guardrail, alleging that the company purposefully failed to inform the public of the dangers of the guardrail.

This case demonstrates why it is critical to always consult with a skilled Virginia personal injury attorney before discussing injury claims with anyone. If you have been injured in a car accident, there could be more than one party responsible for those injuries and an experienced accident attorney can ensure that your legal rights will be protected against aggressive insurance companies.