Tractor trailer tires are designed only to travel at a maximum sustained speed of 75 miles per hour, but many truckers across the US are exceeding that limit, according to a recent report in Baltimore.

Between 2009-13, heavy trucks and buses caused 14,000 fatal crashes across America. US government statistics show that 223 of those crashes were in part due to tire failures. 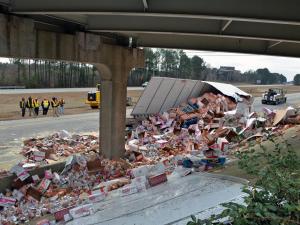 A study by the national Highway Traffic Safety Administration into these truck tire blow outs found that high speed and poor maintenance were the culprits.

According to the Maryland Motor Truck Assn., the top speed for a truck should not be more than 75 miles per hour. And the NHTSA notes that there are higher speed limits now in several states. Sixteen states have truck speeds of at least 75 mph. Four states have speeds over 80 mph.

Even the American Trucking Association says that it has been warning for years of the dangers of higher speed limits. That group says that speed limits at the state level should not be more than 65 mph.

That group emphasized that truck drivers should check their tire conditions before and after every run because if one fails at 75 mph or more, the result could be a catastrophic accident that kills people.

Our truck accident personal injury law firm routinely sees tragic cases where poor maintenance and/or high speed leads to needless death and injury. Many truckers are in a hurry to get their load to its destination so that they are paid on time. This can lead them to drive faster than they should. We have seen many innocent drivers’ lives taken by careless and reckless truck drivers. Our firm has had many successful, large settlements in truck accident cases, including ones for $3.5 million, $2.4 million and $650,000.