When people think of a head injury that accident victims sustain, they usually assume that the injury is an obvious one. For example, when a person is in a bad car accident and their head smashes the windshield or someone who falls and suffers a heavy blow to their head. But there is another type of head injury that many car and other accident victims suffer from that is silent and slow-growing. It is called a subdural hematoma and if this type of injury is not discovered, it is often fatal. 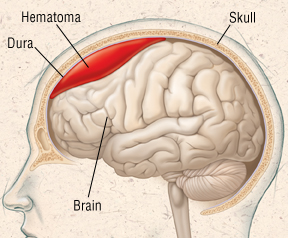 As we get older, our brains shrink, causing a pulling away for the dura, which is the protective layer. This pulling away exposes veins, leaving them more vulnerable to tearing or other injury. When an injury to a vein occurs, the blood begins to seep from the area, building a low-pressure line of blood along the brain’s surface layer. This line of blood can begin to pool, which puts pressure on the brain. The damage this causes is just like the damage caused by a brain tumor.

It is estimated there are approximately 200,000 people who suffer a subdural hematoma every year. Many are misdiagnosed, while others go completely undiagnosed. This can be because the victim doesn’t remember hitting their head and also because the symptoms are just a low-grade headache.

After some time, more signs may begin showing up. The victim may begin experiencing the following symptoms, which could be signs of a subdural hematoma and should seek medical attention immediately:

If you’ve suffered a head injury in an accident caused by the negligence of another party or parties, you may be entitled to financial compensation for that injury. Expenses for medical bills, lost wages, pain, emotional anguish, permanent disability, and other losses you may have suffered are damages that a victim of an accident can seek under Virginia law. A Virginia brain injury attorney can advise you on what legal recourse you may have.