In late October, a trailer being pulled by a van in Michigan became unhooked and smashed into a 2006 Mercury Mariner SUV killing the driver, according to MLive.com.

Less than a month later, a boat trailer being pulled by a vehicle in Maryland broke loose and slammed into a Honda pickup truck injuring the driver, according to Baynet.com.

This image is courtesy of Baynet.com 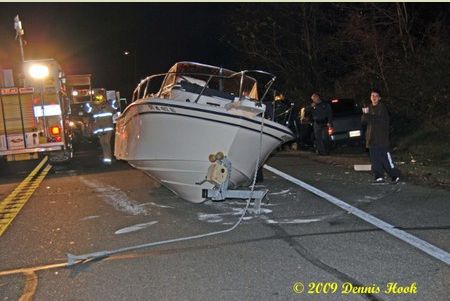 This problem continues to escalate, but it is receiving very little attention at the state and federal level. In fact, legislators are turning a blind eye to the fact that people can easily attach shoddy trailers to their vehicles. Currently, there are virtually no federal regulations for trailers weighing below 3,000 pounds. This leads people to completely under appreciate safety measures for these devices. There have even been instances of trailers being attached to automobiles with duct tape, rope, and/or cheap, plastic wires.

As a result, since 1988, close to 470,000 people have been injured by runaway trailers and nearly 770,000 cars have been damaged, according to dangeroustrailers.org.

If something isn’t done, the accidents mentioned earlier will continue to grow in regularity and countless lives could be lost.