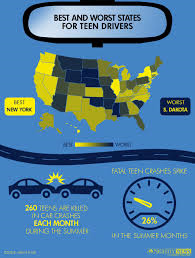 Raising a child is hard work, think of all the diapers, first days of school, scraped knees and of course happy memories.  So when your child becomes a budding teenager most parents feel that they can take a small sigh of relief that they made it this far.  But think about this before you hand the keys to the car over or even let your teen get into a car with another teen driver; car crashes continue to be the leading killer of teenagers.  In 2010, seven teens ages 16 to 19 died every day from motor vehicle injuries. Per mile driven, teen drivers ages 16 to 19 are three times more likely than drivers aged 20 and older to be in a fatal crash.

As a parent you can help by discussing these factors which put teens at risk:

·         Teens are more likely than older drivers to underestimate dangerous situations or not be able to recognize hazardous situations.

·         Teens are more likely than older drivers to speed and allow shorter distance from the front of one vehicle to the front of the next.

·         Compared with other age groups, teens have the lowest rate of seat belt use.

As Virginia (VA) car accident injury lawyers we know that a car accident or related death involving a teen can be traumatic.  Losing a teenager in a car wreck can have far-reaching emotional and psychological implications.