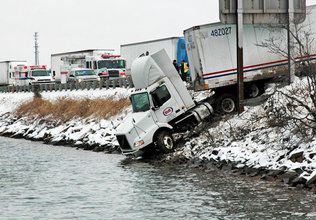 The winter storm which gripped much of the southeast this weekend created some rather treacherous road conditions. As a result, major accidents and injuries occurred. One of the most harrowing examples was a tractor trailer dangling from I-77 nearly plunging into Lake Norman after the driver slid off the highway, according to wmfnews.com.

“As you can see, it’s a solid sheet of ice out here,” said truck driver Lenney Moore, who was only a little behind the accident when it happened.

Car and truck drivers need to extremely vigilant if they’re on the road when a bad winter snow storm hits. Snow can lead to ice which lead to slipper roadways and potentially black ice . This is when patches of ice develop which are virtually transparent and a car or truck can drive over it, spin out of control, and cause a serious wreck.

Being cautious is the key to preventing such an incident, especially in North Carolina (NC) where many drivers aren’t used to a major snow storm. In some parts of NC, the average snow fall per year is a single inch.

Truckers need to be especially cautious considering federal regulations are in place outlining what to do when operating a commercial truck in winter weather.

Ideally, when a winter snow storm hits, just stay home and wait it out, but if you have to travel always remember to slow down (drive at least 10mph below the speed limit), apply your brakes early and often to avoid a sliding, and do not take your eyes off the road.