Airplane Crashes Are Serious Accidents and Could Cause Serious Injury 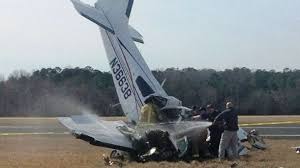 It will come as no surprise that most small plane crashes produce serious personal injuries or death for the occupants of the airplane.  Aircraft crashes do not produce “fender benders.”  The majority of these airplane crashes are the result of mismanagement by the airplane pilot of his fuel supply so families often want to consider a wrongful death lawsuit or suit for catastrophic or serious personal injury.  This can be because the pilot and crew failed to realize how much fuel they have on board before starting an airplane flight.  This can also be due to miscalculation by the pilot regarding how much fuel is going to be required to fly an aircraft for the intended trip.  Both of these serious mistakes lead to the need for an emergency landing.  Unless the pilot has a suitable area available to him to land the airplane with the engine not running, the results are usually a serious airplane crash with serious personal injuries, closed head/brain injuries and death.

A second pilot mistake that nearly always results in an airplane crash relates to the pilot’s failure to appreciate the weather conditions that he or she is flying into.  By definition, an airplane flight can go over a substantial distance from beginning to end.  As we all know, weather conditions change from one location to another and from one time of day or night to another time.

When a pilot fails to appreciate the weather conditions that are going to occur along his intended flight, this can frequently result in the pilot encountering weather conditions that either he or his airplane cannot handle.  When this happens, an airplane crash is almost inevitable.  These types of crashes almost always result in serious personal injuries or wrongful death.

The most important thing to remember when undertaking an airplane flight that is not on a commercial airline, is to make sure the pilot and co-pilot flying your airplane are properly trained and licensed.  As we say in the industry, every landing you walk away from is a good landing.