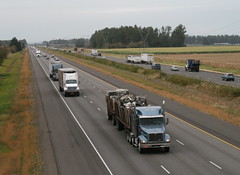 The Federal Motor Carrier Safety Administration, which, among other responsibilities, enforces interstate trucking regulations and records crash statistics for tractor-trailers, identified 88 fatal crashes involving “large trucks” in Virginia during 2017. Those wrecks involved a total of 101 vehicles of all types and left 88 people dead.

Understand that the FMCSA defines a large truck as any vehicle with a gross combined weight rating of 10,001 pounds or greater. Tractor-trailers, dump trucks, log haulers, tanker trailers and many types of construction vehicles fall into this category. Now, think about how many large trucks you encountered the last time you drove on I-64, I-664, I-95, I-81, U.S. 460, U.S. 17 or U.S. 13—to say nothing of Military Highway, Northampton Boulevard or Virginia Beach Boulevard.

Since our main personal injury and wrongful death law firm offices in Virginia Beach, those are the interstates and highways that most readily come to mind. Deadly dangers from negligent and reckless truck drivers exist all across Virginia, of course, and the death toll remains remarkably consistent from year-to-year.

The injury stats hold equally steady across time, with 1,684 in 2015 and 1,632 during 2017. A small spike in large truck crashes inflicting injuries occurred in 2018, when 1,811 individuals required medical care following a large tuck crash in Virginia.

The reason for each of the reported, sometimes tragic, collisions range from driver distraction and fatigue to speeding and running red lights. We know from helping hundreds of truck crash victims that nearly every wreck probably could have been prevented. The at-fault driver could have put down their electronic logbook, followed federal and state regulations mandating adequate rest between shifts, or simply obeyed traffic signals. Often, just keeping a truck and its tires fully inspected and properly repaired saves lives.

The fact that nearly the same number of deaths and injuries follow large truck crashes each year indicates that similar. avoidable mistakes keep being repeated. Until that stops, we stand ready to hold at-fault truck drivers and trucking companies accountable for settling insurance claims and paying civil trial jury awards to the Virginians they injure and the families of the people they kill.