Back to School Schedules and the Increased Risk of Drowsy Driving 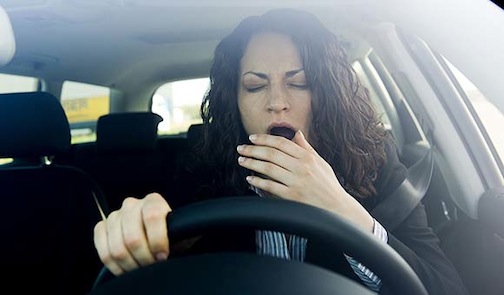 As we approach the end of September, students everywhere have returned to school and are settling into their academic schedules. That is often easier for some students than others. It is not uncommon for both students and parents to struggle to keep up with a new, early morning schedule after enjoying the “lazy days of summer.”

Unfortunately, the early morning starts and increased activity of school, sports, and other extracurricular activities can have a negative impact on how rested parents and students feel and energy levels may not be where they need to be, especially when it comes to being behind the wheel. Parents, college students, and high school students may be at an increased risk of being involved in a drowsy driving crash.

Older students who are balancing school, studying, work, and a social life often find themselves burning the candles at both ends. Parents of young children also may find getting enough rest escapes them as they rush through morning routines, going to work, getting dinner, helping with homework, baths, and bedtimes.

Hectic schedules impact the number of hours we sleep, creating a potential danger on the road. Studies show that driving on less than the recommended eight hours of sleep every night is just as dangerous as getting behind the wheel after having several drinks. When a person has been awake longer than 18 hours straight, the effects are the same as if they have a blood alcohol content (BAC) level of .08, the level that would likely result in a drunk driving arrest.

When a person is driving while fatigued, the effects include:

National statistics reveal that fatigued driving is a factor in at least 10 percent of all vehicle crashes that occur. Even more alarming statistics is that one of out every 25 drivers admits that they have fallen asleep while driving at least once in the prior 30 days of being surveyed.

Many drivers who find themselves drowsy when they get behind the wheel of the car think that if they listen to loud music, drink coffee, and open the window for fresh air, they will feel more awake. However, these activities will not decrease the risks – or the danger – these drivers have of being involved in a crash because they are not alert enough to be driving. Drivers who feel fatigued should avoid driving until they have gotten some rest, just as a driver who has been drinking should avoid driving until the effects of the alcohol have worn off.

If you have been injured in a crash caused by a fatigued driver, contact a North Carolina car accident attorney to find out what damages you may be able to pursue in a car accident claim.

The Carolinas personal injury attorneys from Shapiro & Appleton have successfully advocated for many distracted driving accident victims in obtaining the financial compensation they deserved, including medical expenses, loss of income, pain and suffering, and other losses their injuries have caused. Call our office today at (833) 997-1774 for a free case evaluation.