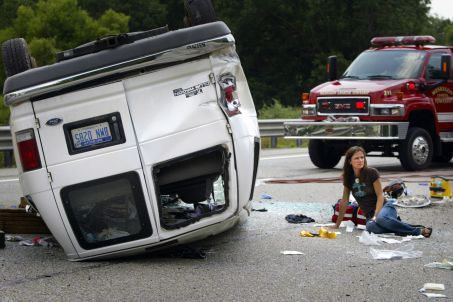 This weekend a piece of debris was left on I-40 in Davie County, North Carolina. A small metal disc might seem harmless, but with vehicles traveling upwards of 70 miles per hour, even a small object on the road can be deadly. The disc was kicked up into the windshield of a passing SUV and killed the driver of the car after striking him in the head.

While many North Carolina papers described this highway fatality as a “freak accident,” highway debris injuries are preventable and often other drivers are at fault. In many cases, highway debris ends up on the roads due to an improperly loaded tractor-trailer or pickup truck – vehicles that do not have their cargo secured or tied down correctly. Unfortunately, the trucks that are responsible for highway debris are often far away from the car accident that follows by the time that they take place. Debris is dangerous for two reasons: it can fly into your vehicle and cause damage or an accident or it can cause a vehicle to suddenly swerve into another lane of traffic or run off of the roadway.

All in all, an estimated 90 deaths and 25,000 vehicle accidents a year are caused by debris on the road or by debris falling off of vehicles.

Although most improperly loaded trucks only cause dings in your windshield or other inconveniences, debris falling off of trucks can also lead to serious injuries and fatalities:

•    On the Beltway last year, a mattress on the interstate became caught under a car, catching the vehicle on fire.
•    Last November, a man driving on the interstate had a pitchfork hurdled through his front windshield that fell off of a dump truck traveling in front of him.
•    In February, a woman and her passenger were injured when a dump truck lost part of its gravel load on the interstate, smashing the woman’s windshield and lodging glass in her eye.