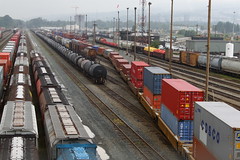 In a presentation at a meeting of the Association of American Railroads convened to celebrate the 100th anniversary of the Federal Employers Liability Act (FELA), researcher intended, researcher Peter French noted that the law exists to “impel the carrier to avoid and prevent negligent acts and omissions.”

French also quoted former U.S. Supreme Court Justice William O. Douglas, who wrote in concurring with the 1949 decision in Wilkerson v. McCarthy (336 U.S. 53) that FELA “was designed to put on the railroad industry some of the cost for the legs, eyes, arms, and lives which it consumed in its operations.”

Wilkerson is important all on its own because it affirmed the right of an injured railroad work to bring and succeed with claims under FELA even when a finding of contributory negligence can be made.

Recalling all this during the year that FELA marks its 111th year is important, as working in and around freight and passenger trains remains dangerous. Crashes, derailments, occupational illnesses and the workplace accidents that occur in all settings continue.

But, as French also noted and which my Virginia-based FELA attorneys and I can confirm, work-related deaths and serious physical injuries to rail employees have declined steadily as enforcement of FELA and related legislation like the Locomotive Inspection Act has increased. For instance, French said, “Before Congress passed the FELA in 1908, more than 4,300 railroaders were killed annually, and almost 63,000 more railroad employees were injured each year.”

During 2018, the Class I railroads Amtrak, BNSF, CSX, Norfolk Southern and Union Pacific reported 17 worker deaths and 3,800 on-the-job injuries. Those numbers are still too high since they are not zero, but the decline is impressive and surely due to vigorous enforcement of FELA rights.

We will continue applying pressure on railroads to protect employees, both in individual FELA cases and through our active membership in organizations dedicated to rail industry safety. Our lead partner is a former chair of the railroad section of the American Association for Justice, and we regularly share information with trial lawyers across the United States to improve legal representation for rail employees.