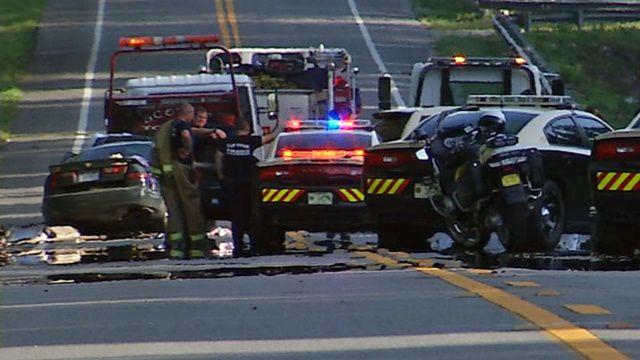 On the surface, car and truck accidental injuries might seem similar. Another driver makes a mistake, there’s a squeal of breaks and shattering glass, and in mere seconds you are left shocked, confused, and suffering from personal injuries. It shouldn’t matter when it comes to my case, you might think, whether a truck or any other vehicle/car/SUV caused the accident and personal injuries. Here are just a few ways in which a truck accident is different from a car accident:

1. Trucks (sometimes called “big rigs,” semi’s, 18 wheelers, or tractor-trailers) weigh considerably more than cars, and can therefore cause considerably more damage, and more serious personal injuries or deaths. While the average American car weighs just over 4,000 pounds, a fully loaded commercial tractor-trailer can weight up to 80,000 pounds. This means that they are harder to slow down, harder to control, and make a much bigger impact when they crash. You are more likely to become seriously injured or die in a truck-related collision.

2. Trucks are not driven by private individuals, but rather by employees. This makes it much more difficult to ascertain who was liable for the accident and whose insurance company should cover the damages. Often one company will hire the driver, another company will own the cab, and a third company will own the trailer and contents. Figuring out whose actions are to blame and who should compensate is very muddled and complicated. Commercial semis are like small rolling businesses – and it can be much harder to go into a legal battle with a company than with an individual.

3. Trucks have large blind spots that can cause serious accidents when the vehicles are turning, backing up, or changing lanes.

4. Trucker and truck operators are subject to a number of strict state and federal regulations. Trucks must be inspected frequently since truck brakes wear out quickly and other mechanical malfunctions are common. Truckers must keep detailed logs and cannot drive for long stretches of time. If you have a knowledgably attorney, you can use this information and evidence to you advantage.

5. Given their occupation, big rig and semi drivers are susceptible to fatigue, prescription drug use, non-prescription drug use, carelessness, and reckless driving. Truck driving can be a high-pressure job with tight deadlines, and the cost of those pressures is often accidents and injuries’
North Carolina (NC): Summary and Facts With beautiful beaches, mountains, and plains, there is something for everyone in North Carolina (NC). The state is a perfect blend of “just rights” – the temperature is mild but not especially humid. The state has many of its old traditions, such as furniture making and tobacco farms, but also has reached into the future with its new finance and technology centers.  Tourist can enjoy whitewater rafting, eclectic nightlife, scenic drives, beach house stays, hunting, golf, and kayaking. More than that, they can take advantage of a number of historical sites, as well as all of the southern hospitality of the area.

Population: North Carolina (NC) has a population of over 8,850,000, with a healthy growth rate of 10 percent over the last six years.

History: One of the earliest places in America to be colonized, North Carolina (NC) was populated by English colonists sent by Sir Walter Raleigh in 1585. The settlement of Roanoke Island was not a success. The first permanent settlers were not installed until almost 80 years later. Though North Carolina (NC) played a small role in the American Revolution, it had a bigger part in the Civil War, where it was pressured to join the Confederacy despite its slightly Northern leaning concerning banning slavery and other Union ideas. Today, North Carolina (NC) is a rich mix of agriculture, manufacturing, and technology industries.

Climate: Located on the Atlantic Coast, the shores of North Carolina (NC) are kept mild in the winter and warm in the summer – summertime highs in the beach hover around 90 degrees while wintertime lows rarely go below the freezing point. The coastal plain rarely sees more than an inch of snow a year. Moving inland, the seasons are more defined, with temperatures fluctuating more and with sleet and freezing rain much more common. In the mountains cooler weather can be found due to altitude, with 20 inches of snowfall per year and summers with temperatures in the 70s. Across the state severe weather is rare, with a mild mix of tropical storms, thunderstorms, and a rare hurricane.
The major interstate highways in North Carolina (NC) include I-26, I-40, I-85, I-74, I-73, I-77, I-85, and I-95.

Interstate 26 is a major southeastern roadway that runs diagonally northwest to southeast. It travels through North Carolina (NC), South Carolina (SC), and Tennessee. The highway enters North Carolina (NC) at Polk County and passes through Columbus, Flat Rock, Hendersonville, Fletcher, Arden, and Asheville. It includes the Peter Cuice Memorial Bridge, which passes over the Green River.

Interstate 40 -the Eastern terminus is in Wilmington, while in the west it ends at the Tennessee state line. Since the vast majority of the highway is in North Carolina (NC), and since it connects the Big Four sports universities in the area, it is often called “Tobacco Road.” I-40 runs through Knoxville, TN, Asheville, Hickory, Statesville, Winston-Salem, Greensboro, Burlington, Chapel Hill, Durham, Raleigh, Benson, and Wilmington.

Interstate 73 Although called an interstate, I-73 is wholly contained in the state of North Carolina (NC). It is a newer freeway that is not yet complete – in the future, it will run from South Carolina (SC) to Sault Ste Marie, Michigan. Currently, though, only pieces of the road exist in Candor, Ulah, Greensboro, and Ellerbe. The most used part is the Greensboro Urban loop.

Interstate 74  Like I-73, I-74 is not yet completed and only exists in several disconnected pieces of road. Currently, I-74 runs from Davenport, Iowa, to Cincinnati, Ohio, and also contains several floating pieces in North Carolina (NC). One piece runs from I-77 to US 53 south of Mount Airy. Another is an overlap of I-73 and US 220 from Asheboro to Candor. A third and final segment exists in the south of the state from Laurinburg to NC 710 near Pembroke.

Interstate 77 is considered the best north-south highways for crossing the Appalachian Mountains. At its northern end, the road ends in Cleveland when it junctions with I-90. At its southern end, its terminus is in South Carolina (SC). In North Carolina (NC), the road comes up through downtown Charlotte followed by Lake Norman, Hutersville, Cornelius, Davidson, and Mooresville. Finally, it intersects I-40 and I-74 before leaving the state.

Interstate 95 is the major north-south thruway on the east coast, running from Maine to Florida. In North Carolina (NC), it runs from Rowland to Roanoke Rapids in the eastern third of the state. Highway 301 runs parallel to I-95, which also passes through Lumberton, Fayetteville, Benson, and Rocky Mount.

The Law Firm of Shapiro & Appleton& Duffan is made up of a team of experienced personal injury attorneys and investigators that understand the complexities of a truck accidental injury case and that can use those complexities to your advantage.

There are many, many accident injury lawyers who say they are able to help your case – but do they have the specific expertise of truck accidents that we pride ourselves on? Do they have our winning record and access to multiple experts on the subject? We have specific truck and big rig experience with proven results. Don’t take your truck and car accident to just any accident lawyer.

If you or a loved one has been injured or killed in an accident involving a commercial truck, 18-wheeler, or tractor trailer, contact our offices today for a free legal consultation today.

Truck Safety Coalition
This is a coalition between the Citizens for Reliable and Safe Highways (CRASH) Foundation and Parents Against Tired truckers (PATT). It offers truck safety issues, facts and figures, the latest news, and a related newsletter.

Commercial Vehicle Safety Alliance
CVSA is a not-for-profit organization that promotes commercial truck safety and security. Their website shares news, events, committees, and members information as well as tips and advice on how truck drivers can reduce accident rates.

Institute of Drive Behavior
This site is a collection of safety videos for truck drivers – both new and experienced – aimed at reducing and preventing accidents.

National Highway Traffic Safety Administration
The NHTSA is a government-run website that offers the public the latest news, research, and safety advice in relation to car and truck accident prevention.

AAA Foundation for Traffic Safety
Since 1947, this non-profit organization has funded over 170 research projects designed to discover the causes of traffic accidents. The website includes traffic safety news, research results, and much more.

US Department of Transportation
The website itself will inform the reader of the latest news, research, tips, programs, and statistics generated by the government agency.

National Safety Council
This is the nation’s leading resource on the development of strategies for advancing safety programs and practices. Their website offers statistics, tips, advice, news, and information related to car and truck accidents.

FMCSA Analysis and Information Online
This website is a vital resource for those seeking track accident statistics.