Speed, Distraction by Cell Phones as Deadly for Train Operators as for Drivers 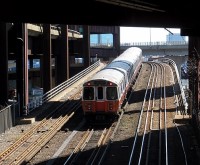 A crash between two commuter trains in the Boston area just as cell phones became common illustrated how reckless speeding and distraction would not be problems confined to the nation’s highways. As summarized by the New York Times, a National Transportation Safety Board investigation determined that the operator who caused the deadly train crash in Newton, MA, was traveling around 38 mph along a rack with a 10 mph speed limit when she slammed into the end car of a slower-moving train.

The collision cost the at-fault train operator her life and left a dozen passengers injured. Other evidence suggested that she missed a signal light cautioning her to leave a red light at slow speed. Specifically, the NTSB received more than one report that the operator was speaking on her cell phone as she sat in the locomotive can.

After a far more deadly Amtrak derailment blamed on speeding and operator distraction occurred just outside of Philadelphia a few years later, federal regulators cracked down on the use of handheld electronic devices by train engineers. Crew members can no longer use cell phones or personal communication or entertainment devices while in a moving locomotive.

As Virginia-based railroad injury and wrongful death attorneys, we welcomed that rule in mid-2011. Unfortunately, we continue seeing preventable train crashes and derailments due to distraction.

The long-delayed implementation of automatic braking systems along commuter rail and freight rail tracks should reduce the dangers posed by speeding and distracted train operators. The risks will not be eliminated, however, until all train members chose to set down their phones and tablets.

Engaging with a screen takes an engineer’s eyes and mind off safety signals and the tracks ahead. Immediately recognizing and responding to crash risks are essential when operating a train that takes so long to stop and can do so much damage.