Metro North Train Derailment May Have Resulted from Exhausted Engineer 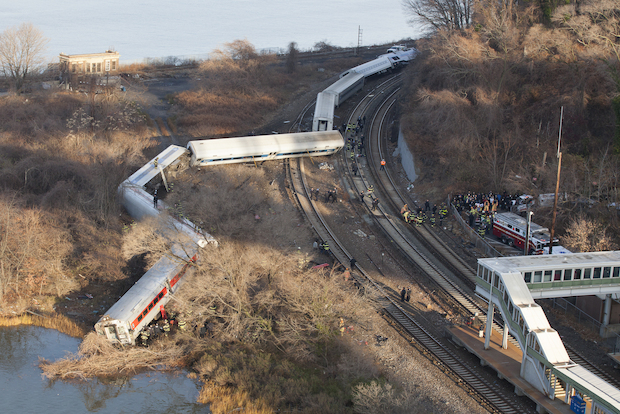 The news surrounding the tragic Metro North train derailment has gone from bad to worse. We initially had to process the fact that a terrible tragedy occurred during the 2013 holiday season which left four families grieving for lost loved ones and multiple passengers struggling with seriuous injuries. But now we're learning that the derailment may have been preventable.

Investigators suspect that engineer operating the Metro North train dozed off and woke up too late to stop the train from going off the tracks, according to DNAinfo New York.

This news comes on the heels of learning that the train was traveling at 82 miles per hour in an area with a speed limit of 30 miles per hour. The throttle was still engaged — giving the engine power — until six seconds before the locomotive, in the rear of the train, came to a stop, according to the New York Times.

As the train entered the curve, the engineer reportedly awoke from his sleep and slammed on the brake, but not in time. The train cars derailed, and several careened onto their sides before grinding to a halt on the edge of the Harlem River. Four people died and over 60 other passengers were seriously injured, according to the Huffington Post.

So what does all this mean? Well, it means that this awful wreck could have been avoided. If only the engineer had exercised proper caution and informed someone, anyone, of his exhaustion. If only the train was not being run at a reckless rate of speed (the train was traveling almost 3 times faster than what is permitted at the curve where the train derailed. Because of this negligence, four people are dead and dozens more are forced to recover from serious injuries.