Our Virginia personal injury law firm offers the following information as a public service. Single-vehicle accidents involving animal darting across a highway do not provide grounds for lawsuits. At the same time, animals in the roadway can set the stage for rear-end  collisions, sideswipes and head-on crashes. In the interest of keeping everyone safe, we share what we have learned about avoiding wrecks when animals appear unexpectedly in the path of a car or truck.

Animals in the roadway cause thousands of crashes in Virginia each year. The problem is so significant that the state Department of Wildlife Resources (DWR) keeps annual statistics on drivers hitting deer. 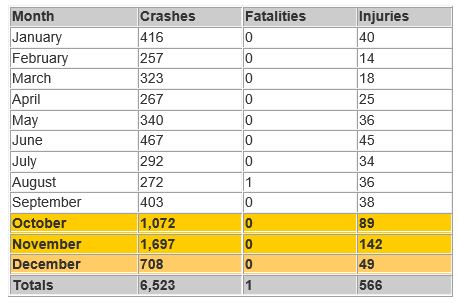 Dogs, cats, cattle, ducks, geese and a menagerie of other pets, livestock and wildlife can seem to appear out of nowhere, forcing drivers to make a split-second decision to swerve, slam on their brakes or brace for a collision. All sound like poor choices in the abstract, and each does have its potential downsides. But best practices for encountering animals while driving do exist.

Panicking is always the wrong move. Not reacting at all is also potentially dangerous. As the DWR chart presented above shows, hitting a large animal such as a dear can lead to injuries or deaths for drivers and passengers. A particular problem involves the animal coming up over the hood and crashing through windshield. Slamming into a cow weighing a ton or more can destroy a car the same way that speeding headlong into a wall would.

Swerving creates dangers for the driver and everyone else on the road. The Federal Highway Administration studied what it called “roadway departure crashes” and published it findings in 2011. The agency determined “roadway departure crashes account for more than half of United States highway fatalities.” These deadly wrecks happened when a driver ran off the side of the road, drove onto the median, crossed the center line of a divided highway or unexpectedly changed lanes.

The agency further noted that roadway departure crashes happen most frequently on rural highways, which is also where drivers are most likely to encounter animals. The solution in such a scenario would appear to be stopping as quickly as possible.

Unfortunately, rapidly reducing one’s speed along a stretch of road that lacks exits, intersections and stoplights sets the stage for a rear-end collision. Our Virginia personal injury law firm represented the victim of such a crash. The woman braked for a deer moments before a distracted driver slammed into the back of her car.

As we noted above, this is the most-likely scenario for a crash involving n animal giving rise to a personal injury lawsuit. The following driver acted negligently by failing to keep a proper lookout and by not stopping when our client did. Only people who can be found negligent can be held liable for inflicting injuries. Animals themselves cannot be sued.

Unfortunately, completely avoiding animals while driving will never be possible, When an inevitable encounter occurs, the Farmer’s Almanac offers these tips for minimizing harms to yourself, other and the nonhuman: