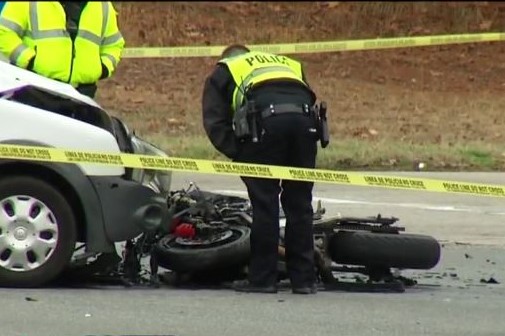 A 33-year-old Durham man was killed Tuesday morning when the motorcycle he was driving was hit by a van taking a turn. The fatal crash occurred on N.C. Highway 55, where the road intersects with Interstate 40.

According to police, a 44-year-old Durham man, driving a 2013 Ford transit van northbound, attempted to take a left-hand turn onto Interstate 40 when he slammed into the 2016 Yamaha motorcycle which was traveling in the southbound lane.

The victim was pronounced dead at the scene and the driver of the van was charged with misdemeanor death by vehicle. Police continue to investigate the crash.

According to federal statistics, almost 5,000 people are killed each year in motorcycle crashes. Fatal motorcycle crashes are almost 30 times the fatality rate of other vehicle accidents. For those who are fortunate enough to survive often suffer catastrophic injuries that often leave victims with permanent disabilities. Tragically, the number of fatal motorcycle accidents keeps rising every year as more and more people purchase motorcycles. Last year, almost 500,000 motorcycles were sold to customers in the U.S.

The number one cause of serious injury or death in a motorcycle crash is a head injury. The results of a head or brain injury can lead to a lifetime of permanent disabilities and severe health issues, including coma, brain damage, cognitive difficulties, and emotional issues. North Carolina does have a helmet law that requires all riders to wear a helmet, however, a helmet is not 100 percent guaranteed to protect from head or brain injuries.

Other injuries that motorcyclists can sustain in a crash include fractured bones, spinal cord injuries, amputations, and road rash. In many cases, road rash can be so extreme that layers of the victim’s skin are completely removed, exposing muscles and tissues. This is why anyone riding a motorcycle should always wear protective clothing, boots, gloves, and other gear.

Our personal injury firm has successfully represented many victims of motorcycle accidents who have suffered life-long injuries from the crash, as well as families who have tragically lost loved ones in accidents. If a family member has been killed in a motorcycle accident, contact an experienced North Carolina wrongful death attorney to find out what legal action you may be able to take against the other driver.