An Indiana jury has awarded what may be the largest wrongful death settlement ever in that state – almost $13 million.  The damages were given to an Elkhart man whose wife, as well as two other women, were killed in a horrific crash involving a truck transporting a large wind turbine.

The tragic accident happened in September 2011, when the plaintiff and his wife attended a fundraising dinner at a local school in Middlebury, IN. After the dinner, at approximately 8:30 pm, they went on a car tour of some of the country roads in the area with one of their neighbors, who was driving a 2007 Lincoln Town Car. The plaintiff sat in the front seat with the 87-year-old driver. In the back seat of the car sat the plaintiff’s 46-year-old wife, the driver’s 87-year-old wife and a third woman, who was 85-years-old. 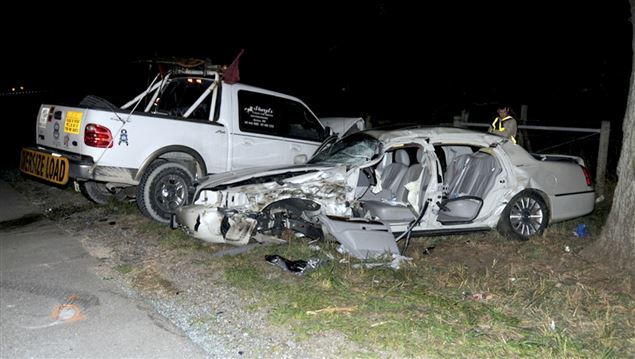 The group was driving on west on U.S. 20 when their car was suddenly smashed into by a huge wind tower component, which was being hauled by a tractor trailer, traveling east. The force of the impact caused the Lincoln to spin around, and it was then slammed by a pick-up truck which was escorting the tractor trailer. All three women in the back seat were killed instantly.

The wind tower component had been protruding almost three feet into the other lane. Not only was this a violation, but the transport company had also violated the law by transporting it in the dark. The law team who represented the plaintiff also discovered that the driver hauling the wind tower part had no experience doing so and was never property trained; the trailer hauling the part was a homemade trailer; the trucking company lied about the height and weight of the load in order to avoid not only the 3:30 curfew put in place by the state, but also avoid paying for the required state police escort for oversized loads.

However, it was not just the trucking company who was found at fault for the fatal crash. The legal investigation also uncovered that the transportation broker who had arranged the transport between the wind tower component manufacturing company and the trucking company was well aware of  the state law now requiring a state police escort of four to five vehicles for oversized loads. This new rule was put in place in response to another fatal accident which involved a tractor trailer carrying an oversized load.

In all, there were seven different defendants that the jury found liable for the plaintiff’s wife’s death. The breakdown of the award amount is:

Our firm has reported on countless incidents involving truck rollover accidents, often caused by overweight loads, which kill or injure thousands of people each year.  If you have lost a family member in a tractor trailer accident, contact an experienced North Carolina wrongful death attorney to find out what legal recourse you may have against the company and driver of the truck.