$900,000 Settlement Obtained for Child Who Suffered a Debilitating Hypoxic Brain Injury from a Near-Drowning in a Rental Property Pool

During the summer of 2015, a family with many relatives and children were vacationing at a North Carolina beach rental property when, shortly after dinner, one of the adult parents was horrified to discover a 3-year-old child floating face down in the fenced-in pool that was on the property.  The child was pulled from the pull and relatives began administering CPR. Family members called 911 and first responders were on the scene within minutes to ensure they provided life-saving assistance.

The rescue squad arranged to airlift the 3-year-old boy to Children’s Hospital of the Kings Daughters in Norfolk, Virginia. Immediately after the child was taken away, family members looked for answers as to how this horrible incident could have been allowed to happen. One of the relatives checked the pool gate closest to the front driveway and noticed that the self-latching gate did not regularly latch. Instead, the rusty metal latch bounced off the receiving part leaving the gate unlatched and unsecured. The result? A near-drowning of a young child whose life was almost lost and could be haunted by this incident for years. 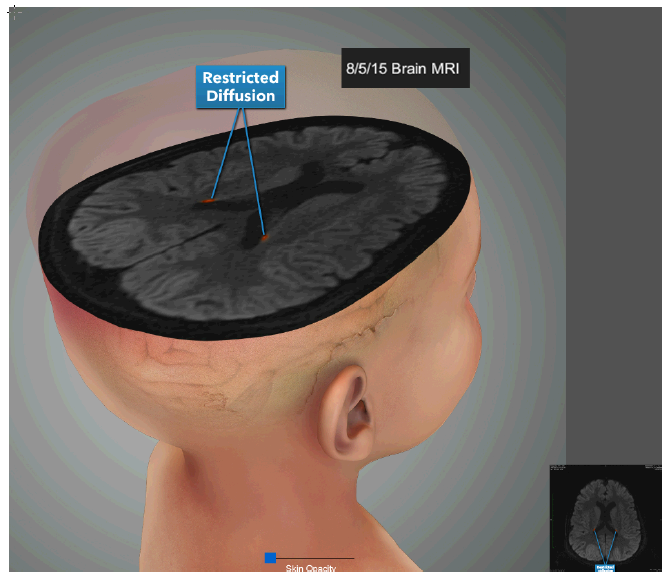 The rescue squad was able to restore a heartbeat in the three-year-old boy during the airlift and he was rushed into and admitted to CHKD in Norfolk. Doctors placed him in a cryogenic state hoping that, after appropriate therapy, they might be able to restore brain function. It was estimated that the boy had been underwater without oxygen for 3-5 minutes and the doctors provided a grim assessment due to his severe hypoxic brain injury. Miraculously, after several days, the doctors were able to bring him out of the cryogenic status and were cautiously optimistic about his cognitive status and brain function.

The child remained in the Children’s Hospital in Norfolk for about one month. He was then transported to Children’s National Rehabilitation Hospital for acute inpatient rehabilitation in Washington D.C., closer to his home.  Following the extensive rehabilitation treatment and therapy, it became clear that the 3-year-old boy was going to suffer undetermined cognitive affects from the lack of oxygen, as the doctors diagnosed hypoxic brain injury. His physical impairments became apparent as doctors and therapists needed to work with him to teach him to walk again, to work with him on his speech, and to work on his other physical impairments.

The child’s mother reached out to our North Carolina personal injury law firm due to our previous experience with traumatic brain injury cases and working with multiple TBI experts and rehabilitation professionals.  She explained that although the near-drowning incident was unwitnessed, she provided cell phone videos that demonstrated the pool latch closest to the driveway was practically useless and unreliable. The latch would remain slightly ajar on repeated testing.

Traumatic brain injury cases are some of the most complex and difficult in the field of personal injury law. The ramifications of a brain injury can be difficult to fully assess, especially when the victim is a young child. The fact that no one actually saw the child enter the pool area presented another issue. Our legal team knew we had our work cut out for us, but we were also shocked by the videos showing the latch failing repeatedly. Our law firm immediately began researching the rules and regulations governing building structures in North Carolina. We discovered that North Carolina adopted the “BOCA” (i.e. Building Officials Code Administrators). The BOCA standards required all residential pools to be equipped with self-latching gates.

We also studied the provisions of an important statute adopted in North Carolina called the “North Carolina Vacation Rental Act” (the “VRA” for short).  This statute requires that any North Carolina landlord leasing a vacation rental property must be in compliance with all building codes at the time of renting the property. Also, vacation rental landlords are required to provide a fit and habitable rental premises, as well as safe common areas.

Following our initial investigation, our North Carolina personal injury law firm retained a pool safety expert with experience in aquatic safety.  He conducted a personal inspection of the vacation rental premises and later wrote a detailed report highlighting multiple violations of the North Carolina Rental Act regarding to the gate latch. He also outlined several national pool safety standards with regards to pools that were also violated as a result of visiting the property and taking measurements and photographs.

On the pool safety issues, we had our expert measure the pool gate and latch area. We also established the height and reach of the young boy at three years old. We created graphics demonstrating that the young boy could not reach the actual metal latch on the upper, inside facing surface of the gate himself. This led to the conclusion that the gate must’ve been ajar and not have had reliable latches required under the code. We included one of the graphics that we used in the case here in this case result. 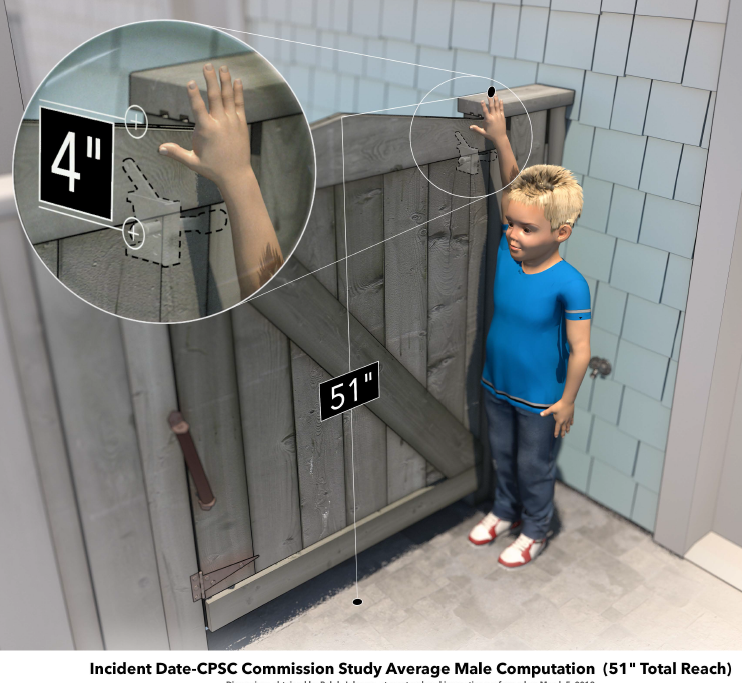 Establishing the Extent of Our Client’s Harms and Losses

Working with an appropriate group of medical professionals is vital in a brain injury case, and the professionals that were retained in this case included:

This culmination of this extensive analysis resulted in anticipated medical and vocational economic losses that stretched into the millions of dollars and far beyond the available $1 million in insurance coverage.

Our law firm attempted to negotiate with the insurance company for the realty company that owned the property. These negotiations proved unfruitful so our law firm filed a brain injury lawsuit in North Carolina superior court. After court-ordered mandatory mediation failed, serious settlement talks got underway about a month before the scheduled commencement of a trial.

The defendants asserted that we would have difficulty proving that unreliable latches provided the 3-year-old’s access to the pool, and the defendants further claimed that a lack of proper parental and adult supervision contributed to the near-drowning.  Ultimately, a global settlement of $900,000, was reached, which came close to the maximum amount of all available insurance coverage. Our law firm then assisted the family in establishing both a trust fund and structured settlement annuity for the child so the money will grow and begin paying out to them when they reach the age of 18. It is also worth noting that settlements involving minors must be approved by a court in North Carolina. The court approved the settlement in this case.

$900,000 settlement (including structure settlement annuity for our client)

Legal Team for the Injured Child