Our Virginia personal injury client was on a family vacation from Florida and staying at a rented vacation home near Smith Mountain Lake when he slipped on a set of stairs built into a hillside and broke his left pelvis. At the emergency room, doctors diagnosed an acetabular fracture with medial wall impaction.

He underwent immediate surgery to repair his left hip bone. That procedure involved implanting several pieces of hardware. Doctors soon told him that he would need a total hip replacement if he wanted to walk without experiencing serious pain.

After spending 27 days in a Roanoke, VA, hospital while his wife stayed in a hotel, the injured man transferred to a rehab facility in Durham, North Carolina (NC). During his three months in Durham, the man learned how to walk with the aid of a rolling walker. For most of his time at the hospital and the extended-stay care facility, his wife or medical staff had to lift him in and out bed, bathe him and change his bed pans.

Our client also received his replacement hip in North Carolina only to develop a serious infection that lengthened his hospitalization and kept hm and his wife from returning to their home in Florida. Since the couple had only packed for a two-week vacation at the lakefront property in Virginia, they needed to buy clothes and pay all kinds of costs they had not budgeted for over and above hospital bills.

Our Virginia personal injury law firm took this case as a textbook example of premises liability. The staircase on which our client slipped, fell and broke his hip consisted of stone pavers. The slick stones were also set into a steep hillside without being lined on both sides with sturdy railings.

The property insurance company, however, was prepared to argue that our client could have fallen and injured himself on any set of steps because he was in the early stages of Parkinson’s disease. We countered that attempt to blame our client for causing his own injuries by gathering a significant amount of evidence showing that the staircase violated state and local building codes.

An architectural expert who reviewed photographs of the vacation property and its hillside staircase confirmed that a safer choice of building materials would be wooden or concrete steps. Additional investigations revealed that the stone pavers were not properly secured in the ground, leaving them prone to shifting when people stepped on them.

The case went to a jury trial, and we presented each juror with a booklet containing vacation property photos and a summary of the architectural expert’s report. We also succeeded in having the judge issue jury instructions that spelled out the legal duty of a property owner to protect visitors (see below). 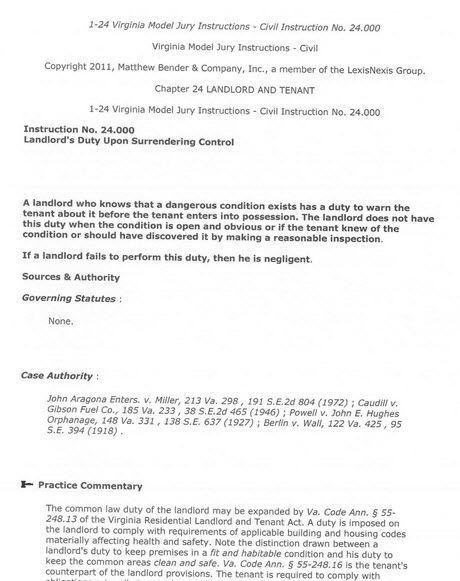 At the conclusion of the trial, our client received $800,000 on claims for his medical expenses, pain and suffering, a partial disability in the form of a permanent limp and personal expenses such as all the restaurant meals his wife had to eat while he remained in the hospital and rehab facility.

An interesting, and somewhat angering, aspect of this premises liability case was that the property insurance company tried to invoke a contributory negligence defense. Under Virginia law, accident victims who can be blamed in any way for causing the incident that left them injured or dead lose their right to hold any other party accountable. This is true even if, as happened here, the other party bears an overwhelming share of the blame.

The man who slipped, fell and broke his hip on the out-of-code staircase did not choose to develop Parkinson’s. Nor did our Virginia personal injury client have any knowledge of the danger the loose stone pavers posed. And he certainly played no role in constructing the unsafe staircase. We are glad that the jurors placed liability where it belonged and ordered the property owner’s insurance company to pay just compensation.