Our personal injury client had his lower left leg crushed by a forklift driver. The crash occurred in the loading dock area at the warehouse where both people were working, and there was no doubt that the forklift operator caused the collision by backing into our client.

After knocking our client down, the forklift rolled over the man’s leg, which snapped his tibia and fibula. The wheel of the forklift also caused a degloving injury, detaching most of the skin between our client’s knee and ankle.

Surgeons repaired our client’s shattered bones and sewed up the gaping wound on his leg, but the crash victim will likely need to use a cane or walker for the rest of his life. He spent months out of work recovering and lost significant earnings.

When Is It Possible to File a Personal Injury Lawsuit When I Also Have a Workers’ Compensation Claim?
A Virginia Personal Injury Attorney Discusses Forklift Accidents Caused by Negligent Drivers
Discussing Degloving Injuries

Our client submitted a workers’ compensation claim and received benefits. Normally, that would be the end of the case. Nearly every state blocks employees from suing their employers following on-the-job injuries.

Employees are, however, allowed to pursue what are called third-party claims against people who do not work for their own company. Third-party claims are also allowed against the makers of defective tools and equipment.

Our personal injury law firm confirmed that the forklift operator who hit and hurt our client worked for a different company. Consequently, we filed claims against that other company on the grounds that its employee was negligent. The company had liability under a legal principle called respondeat superior. In plain English, respondeat superior means that bosses answer for the negligence of the individuals they manage and supervise. 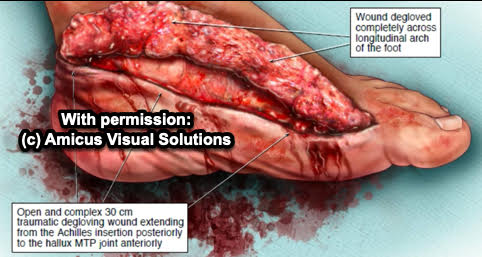 Before we could move forward with our personal injury lawsuit, we needed to counter arguments from the forklift operator’s employer that working in the same warehouse meant that our client and the forklift operator had the same “statutory employer.” The law in this area is complex, and describing how our personal injury law firm won the argument goes beyond the scope of this brief case result report.

Suffice to say, both sides filed extensive legal briefs, a judge conducted a hearing and we were granted the right to continue seeking compensation from the actual employer of the forklift operator.

We established the forklift operator’s fault in causing the crash that so severely injured our client by obtaining and analyzing surveillance video, deposing witnesses and commissioning a forklift safety operator to write a report documenting the mistakes the driver made. We also took sworn statements from the doctors and surgeons who treated or client, and we retained a wound care doctor to provide a special report on the implications of the degloving injury and the future impairment that the injury could cause to our client. Illustrations prepared by a skilled medical illustrator helped us during the interviews with health care providers.

Last, to substantiate our request for the payment of future earnings our client would lose due to his reduced mobility, we had a vocational counselor and an economics professor write a report.

The case ended without going to trial when our client agreed to accept a settlement totaling $1 million. The workers’ comp program claimed some of this settlement as reimbursement for what it paid to cover medical bills and temporary disability. Also, our client elected to take a percentage of the settlement in scheduled payments. This will allow him to minimize his income taxes.

Under the terms of the settlement, we must keep the location of the warehouse, the names of the companies involved and the identity of the court that handled this case confidential.

Our client underwent surgery described below for the tibia and fibula fractures and to re-attach skin with stitches for the degloving injury.  He was left unable to walk without an assistive device for his foreseeable future. In addition, he endured substantial lost earnings.

However, if the negligence of a third party, a “stranger” to your particular employment relationship with your company, negligently causes your personal injuries, you normally have the right to still pursue a negligence case in court-but not against your own employer.  One must still pay back the workers’ compensation benefits you receive from any settlement against a “third party” company, but a jury trial includes the right to recover all lost wages, medical expenses, and intangible amounts for pain, suffering, and permanent impairment.

The investigation determined that the forklift operator was employed by a different company than our client.  We advised our client that he could pursue the negligence action in court and a suit was filed.

Note: All particulars of the place of the incident, the names of the companies, the court and where the case was filed are confidential.