If My Young Child Was Not in a Safety Seat, Can I still File an Insurance Claim?

Even though North Carolina requires all drivers to buckle children younger than 12 years of age into “child restraint devices,” forgetting to do so or not noticing that the kid has undone the straps does not bar filing insurance claims against another person who caused a crash.

North Carolina law largely follows the recommendations of the National Highway Traffic Safety Administration, which tells drivers to do the following:

The actual North Carolina seat belt and child safety seat statute makes it clear that police and state troopers can stop drivers just for violating the child restraint law. Penalties include fines and points on the driver’s Bureau of Motor Vehicles record. But that same statute also contains this clause: “The violation shall not constitute negligence per se or contributory negligence per se.” 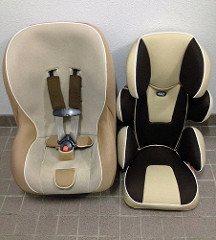 In a North Carolina civil lawsuit like a personal injury claim following a car or truck crash, anything that constitutes contributory negligence per se invalidates claims for compensation and monetary damages. The other driver could be 99 percent at fault, but the tiny bit of fault on the part of the other driver would get an insurance claim thrown out.

Insurance companies may try to tell the parents of an injured child that their claims cannot be settled because the child was not secured in a car seat or booster seat. This is not true. Pointing that out will probably just cause the insurer to try to find some other reason to deny paying medical bills and other crash-related costs.

As North Carolina personal injury lawyers, my colleagues and I encourage parents, grandparents, relatives and caregivers to buckle in young children. We also stand ready to help families whose children do suffer injuries when not properly secured.