The purpose of traffic signals is to reduce the risk of accidents while maintaining an orderly flow of traffic. But some studies show there are many cases where the traffic light may actually contribute to the cause of crashes.

Here in Virginia, some drivers may be confused by certain traffic light signals and officials think that confusion may be the cause for an increase in car crashes. For example, at one location in Bluefield, there has been a spike in accidents since the signal was installed in July. 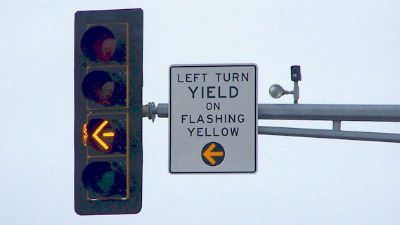 That was when a blinking yellow light was placed at the intersection of Route 460 and Leatherwood Lane. When a driver is going to take a left hand off Route 460, onto Leatherwood, when the light turns green, that means it’s okay to turn, but if there is a blinking yellow light, that is supposed to signal to the driver to turn with caution because the traffic coming in the opposite direction also has a green light.

But the blinking yellow light appears to be confusing to drivers who think it means it’s okay for them to turn because the traffic in the opposite direction has a red light.

This has caused a sharp increase in accidents. Last week alone, there were two crashes. One of the victims needed to be medevaced by helicopter.

According to officials, studies have shown that a flashing yellow light is supposed to be more effective than a green light in signaling to drivers the need to watch out for pedestrians and traffic and to proceed with caution. However, that doesn’t seem to be the situation in many locations, not just here in Virginia, but in other states that use the lights, as well.

A quick online search reveals many reports about multiple locations in many states that were experiencing spikes in car crashes where these lights are installed, including Indiana, Minnesota, and Oregon.

If you have been injured in a car accident, contact a skilled Virginia car accident attorney to find out what legal options you may have. Our personal injury firm has successfully represented many clients who have been injured because of a negligent driver and are available to meet and discuss the details of your case and how we can help.