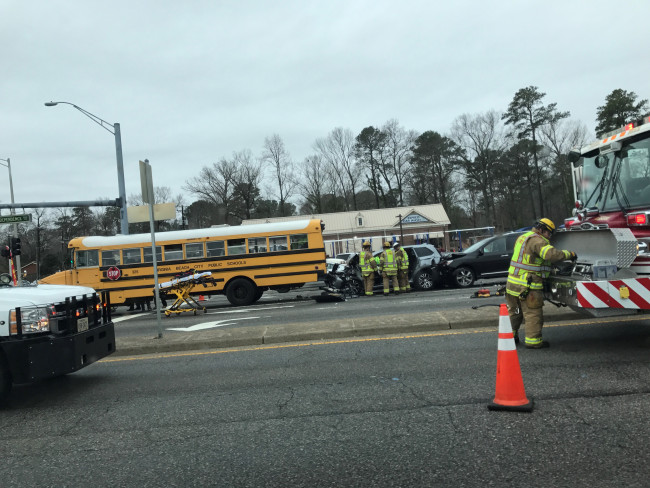 Four students and three other people were injured Monday afternoon in a Virginia Beach school bus crash that involved two other vehicles. The accident occurred at approximately 2 p.m. at the intersection of S. Independence Blvd. and Edwin Drive.

According to police, all four students and the bus driver were taken to the hospital with what appeared to be minor injuries. Drivers from the other two vehicles involved in the crash were also reported to have been treated for minor injuries, as well. A crash investigation is currently underway to determine what caused the crash and whether any charges will be filed.

One of the students told local media that the school bus was stopped at a red light when a vehicle crashed into the rear of the bus. The boy said he hit his head and knee during the impact.

A witness to the crash described a sound like a “big explosion” and reported that some of the students were thrown over the back of the seats.

When Children Are Injured in School Bus Accidents

There is nothing more frightening for a parent to receive a call that their child has been injured. Thankfully, it does not appear that any of the students suffered serious injuries in the crash and will hopefully have quick recoveries. However, as our Virginia car accident attorneys can attest, minor car crash injuries can quickly develop into something more serious, especially in children. And children are not always able to articulate that they are not feeling well or that something is wrong. That is why it is important for parents to be aware of what symptoms to watch for.

The student who was interviewed said he hit his head in the crash. That happens frequently to children in school bus crashes. Concussions are one serious head injury that is often harder to diagnosis than obvious injuries like fractured bones or bruises. But an untreated concussion can be dangerous – even fatal. Symptoms to watch for include:

A car accident can be frightening for an adult so you can imagine how scary it can be for a child, especially when it happens on the school bus, without their parents there. Your child may become afraid to ride on the bus or even ride in any car. A child who has been injured in a school bus accident may also become clingier to their parent, not wanting to be away from them at all. Although this may be normal immediately following the crash, if it continues, it could indicate that the accident has had a serious impact on your child and they may need therapy to help them heal emotionally.

Let a Virginia Accident Attorney Advocate for Your Child

School bus accident claims can be complex, especially when there are other vehicles involved. You could be dealing with school districts, private bus companies that are contracted by the municipality to transport children, and the at-fault driver’s insurance company.

A skilled Virginia school bus accident attorney will be able to investigate the accident and determine what the best legal course of action is. At Shapiro & Appleton, our legal team works diligently for each client to make sure they receive the best possible outcome for their injury case and would be happy to meet and discuss how we can help your family. Call us at (833) 997-1774 today for a free case evaluation.