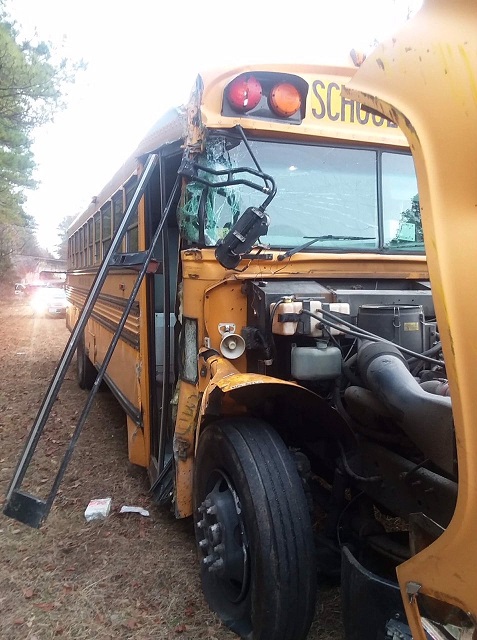 Tragedy was thankfully averted after a school bus slammed into a railroad overpass on Trinity Church Road in Dinwiddie, Va. Monday morning. The school bus was traveling westbound on Cox Road when the single-vehicle crash occurred.

There were 20 elementary school students on the bus when it hit the bridge and police say they have no report of any injuries at this time. Families were notified by school officials and picked their children up at another location.

The driver, who has been employed as a Dinwiddie school bus driver since September 2015, has been placed on administrative leave with pay while the investigation into the crash takes place. Police have charged her with failure to maintain a vehicle.

Just one year ago, another Dinwiddie school bus driver was fired after causing a crash that resulted in the bus flipping over and sending 14 children to local hospitals with injuries. The driver was convicted of reckless driving and failure to maintain control. She lost her operator’s license for 30 days and that resulted in the termination of her commercial driver’s license (CDL). The driver had previously been charged in another school bus accident in 2013 with reckless driving and failure to maintain control but those charges were dropped.

Getting a call from the school district telling you your child has been involved in a school bus crash can be one of the most frightening experiences for a parent; the experience of the crash itself even more horrifying for your child.

If your child was in a school bus accident, whether the at-fault party was the school bus driver or the driver of another vehicle, you may be able to recover financial compensation for any injuries your child sustained. A Virginia personal injury attorney can explain just what damages you may be able to recover based on the circumstances of your child’s case. Some of those damages can include medical expenses, as well as pain and suffering your child went through. Other damages can include emotional distress, scarring or disfigurement, and loss of normal life activity.

School bus accident claims can be complex, possibly involving school districts and private bus companies that are contracted by the municipality to transport children. A skilled Virginia school bus accident attorney will be able to investigate the accident and determine what the best legal course of action is. At Shapiro & Appleton, our legal team works diligently for each client to make sure they receive the best possible outcome for their injury case and would be happy to meet and discuss how we can help your family. Call us (833) 997-1774 today at for a free case evaluation.