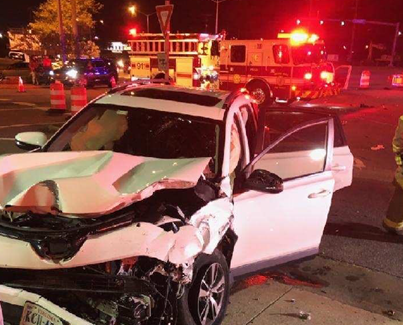 Two young people were killed and a driver was charged with DUI after a drunk driving accident in Rocky Mount, VA last week. The crash occurred at the intersection of Old Franklin Turnpike and Booker T. Washington Highway at approximately 6 p.m. on July 19th.

According to information released by the Rocky Mount Police Department, three vehicles were involved in the accident. One of the drivers, 21-year-old Melissa Holland, was pronounced dead at the scene. A passenger in her car, 18-year-old Christian Hernandez, was transported to a local hospital where he was later pronounced dead. Our condolences go out to the families of these young persons, their deaths were so preventable as it appears drunk driving was the cause of their death, at least it appears this way based on the police charges.

The other two drivers and a passenger in one of the other vehicles did not require medical attention, however, police did charge one of the drivers – a 31-year-old man – with DUI. Police continue to investigate the crash.

Many people enjoy going out or getting together with family or friends. It is common for alcohol to be served at many of these events. But far too often, a fun afternoon or evening out quickly turns into tragedy when a driver makes the decision to drive even though they have been drinking and despite the strict drunk driving laws Virginia and many other states have enacted.

And as the national statistics show, that decision often turns into a fatal one. There are more than 11,000 people killed each year in alcohol-related crashes. That comes out to 32 victims per day that are killed. Every day, 32 families lose their loved ones because a person drives drunk.

At Shapiro, Washburn & Sharp, we have successfully represented many families who have lost loved ones in drunk driving accidents. Each Virginia wrongful death attorney at our firm understands the devastation that families suffer, not only emotionally but financially. And although there is no amount of money that can make up for the tragic death of a loved one, a wrongful death settlement or award not only provides the family with financial compensation for their losses, but also allows the family a form of justice in the civil court system, especially if there is an unsatisfactory resolution in the criminal courts.

In a wrongful death lawsuit, families can pursue damages against the driver who is responsible for the crash. Some of the losses that can be sought in a lawsuit of this type include:

Along with these financial losses and emotional losses, the at-fault driver can also be ordered to pay the family punitive damages, as well. The purpose of punitive damages is to punish the driver for their egregious behavior, as well as let society know that the decision to drink and drive will not be tolerated.

Families who have lost a loved one in a drunk driving accident should consider contacting a Virginia wrongful death attorney to discuss what legal recourse they may have for their pain and loss. Even if there have been criminal charges filed against the driver who was responsible, it is important to keep in mind that not only are these two separate actions but there is also a statute of limitations of two years for how long survivors have to file the lawsuit.

Shapiro, Washburn & Sharp also offers a free wrongful death guide for families who have lost a loved one in an accident. The guide covers topics such as the statute of limitations for filing a wrongful death claim, what types of damages can be pursued, and who can be appointed as a personal representative.

Call our office today for a free and confidential consultation.