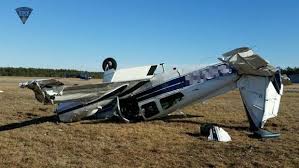 The Virginian Pilot reported today that a small private plane crashed into the home of a Roanoke Island, NC family.  According to the report at around 6:00 P.M., a small propeller plane clipped trees and crashed into the second story deck of the home.  The pilot and a passenger were transported to The Outer Banks Hospital but their injuries did not appear to be serious.

The occupants of the house were home at the time and are believed to have escaped unharmed.  The plane had flown from Monroe, N.C., near Charlotte.  Witnesses said the plane was sticking out of the top of the house, off Burnside Road.  The street was filled with police cars, fire trucks and ambulances.  Witnesses describe the street as “like a runway” because you can practically see the pilots as they fly by heading for Dare County Regional Airport.