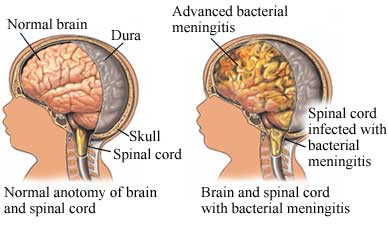 As VA personal injury lawyers we know of many states that now require all new college students to be vaccinated against Meningococcal meningitis prior to enrollment.  However, other states still allow students to bypass the vaccination by signing a waiver.  Many students pursue this option, because Meningococcal meningitis only strikes 3,000 people in the United States.  But when it does strike, the resulting infection is extremely deadly, killing 10 to 12 percent of all those that in infects, sometimes in a matter of hours.  Bacterial meningitis is treatable with a number of antibiotics, but effective treatment requires early detection.  Even those that survive are left with a reminder of this decision, as 20% will suffer from brain damage, kidney disease, loss of hearing and/or sight, or other complications.

Meningitis is a bacterial infection that is spread through air droplets or direct contact with the infected.  Meningitis is characterized by an inflammation of membranes around the brain and spinal cord and can develop suddenly or over time.  Symptoms include fever, headache, stiff neck, nausea, and vomiting.  Because of the close quarters that college students, especially those in dorms, keep, they are at increased risk for infection.

The FDA has approved a vaccination called Menactra, which is 83% effective against the infection.  Still, in 2006, only 12% of all teenagers were vaccinated.  The Center for Disease Control recommends that all children receive the vaccination between the ages of 11 and 18.  Most college students choose not to waive the vaccination.  Since Virginia passed a law mandating that all students at four year universities either obtain the vaccination or sign the waiver, the percentage of those vaccinated has jumped from 55% to 95%, according to Dr. Jim Turner at the University of Virginia.  Additionally, the vaccination is covered by most insurance plans.  Even when the plan will not pay for it, the cost is generally $120.

Menactra does have certain side effects, such as allergic reaction or redness of the injection site.  In addition, it has been linked to a few cases of Guillain-Barre syndrome, which targets the peripheral nervous system and causes a gradual, temporary paralysis.  However, this occurs in approximately 1.25 cases out of 1,000,000.