Are Cameras In Trains an Invasion of Privacy For Railroad Engineers? 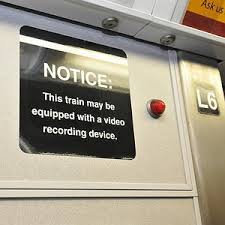 How well would you work if you had a camera pointed at you all day long?  Probably not very well.  Now many hardworking railroad engineers may be forced to do just that.  In what feels like an invasion of privacy the federal government is now considering installing inward-facing video cameras in locomotives due to the many recent railroad accidents

The cameras would be focused on the engineers operating the trains, a step that some experts say could help in the event of accidents to determine whether there was dangerous behavior, like an engineer falling asleep, texting or otherwise being distracted.  However as a fail-safe against such incidents trains already have a dead man’s switch installed.  It is a switch that is automatically operated if the human operator becomes incapacitated, such as through death, loss of consciousness or being physically removed from control.

Railroad unions assert there are alternative, more positive and less intrusive means of supervising train crews—that railroads should devote greater energy to reducing a more common cause of accidents, crew fatigue, plus provide more intensive and remedial employee training. The unions also point out that soon-to-be installed Positive Train Control will provide an effective safety overlay that will stop trains in the absence of appropriate action by train crews.

As Virginia (VA) railroad attorneys we know that many railroad accidents could have been prevented if railroads had implemented Positive Train Control years ago.  The rail anti-crash technology, known as Positive Train Control or PTC, is designed to automatically stop a train before it is able to run a red signal or get itself into other dangerous situations. Instead railroad companies have complained of the cost and have lobbied congress to push the requirement date out from 2005 until 2015 and beyond.