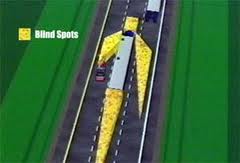 Government agencies such as the Federal Motor Carrier Safety Administration (FMCSA) recommend that drivers, riders and walkers do what they can to protect themselves by staying out of what have been dubbed “no zones.” Heeding that admonition makes sense, but it is not always possible to forgo passing a slower-moving tractor-trailer, hauler or tanker truck.

Also, large commercial trucks share surface roads and parking lots with smaller vehicles and pedestrians. No matter how hard a person tries to steer clear of big rigs, a semi will eventually pull up alongside them, try to move around them or just be near enough to pose a crash risk when someone acts negligently or recklessly.

The FMCSA estimates that a person behind the wheel of a standard tractor-trailer contends with the following blind spots:

These blind spots make merging onto highways and changing lanes particularly hazardous. Drivers of large commercial trucks may simply never see a car or motorcycle cruising in an accompanying lane. When the worst happens and a collision leads to severe injuries or death, the truck operator can be charged with attempting an unsafe lane change.

Reckless driving may also be alleged. Looking just at the Virginia Code, a commercial truck driver who causes a crash while changing lanes could potentially be charged with any of these offenses:

§ 46.2-855. Driving with driver’s view obstructed or control impaired.
A person shall be guilty of reckless driving who drives a vehicle when it is so loaded, or when there are in the front seat such number of persons, as to obstruct the view of the driver to the front or sides of the vehicle or to interfere with the driver’s control over the driving mechanism of the vehicle.

§ 46.2-863. Failure to yield right-of-way.
A person shall be guilty of reckless driving who fails to bring his vehicle to a stop immediately before entering a highway from a side road when there is traffic approaching on such highway within 500 feet of such point of entrance, unless (i) a “Yield Right-of-Way” sign is posted or (ii) where such sign is posted, fails, upon entering such highway, to yield the right-of-way to the driver of a vehicle approaching on such highway from either direction.

Truck drivers are supposed to receive training in ways to compensate for the large blind spots their rigs create. Many newer trucks are also equipped with devices that detect nearby cars. Still, it only takes one poor decision or missed bit of timing to set the stage for an irreversible tragedy.