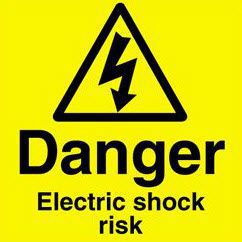 You see warning signs like the one to the left everywhere. You’re taught from the youngest age to take the cation seriously, and you have almost surely lived by the rule of leaving any electrical work more involved than changing batteries and replacing light bulbs to trained professionals.

Avoiding electric shock and electrocution hazards is not always an option, however. I often think back to a case our Virginia personal injury law firm handled for a commercial airline pilot who nearly died after suffering a shock and serious fall in a hotel room. The man had raised his arm while showering, and he grazed an exposed llight fixture that that lacked a cover, Essentially, the case involved negligent maintenance. Hotel management created a potentially deadly hazard to our client.

In light of that story, it is important to explain the difference between an electric shock injury and an electrocution. Our client was shocked and almost died. Had he been electrocuted, he would have lost his life. Risks for shocks that are serious enough to badly injure a person abound. Electrocution risks are fewer, but should never be ignored.

An electric shock that is serious enough to send someone to the hospital can produce a wide array of debilitating and disabling symptoms from which the victim may never fully recover. These include

No One Is Ever Completely Safe From Electric Shock Hazards

Individuals’ health and lives are endangered by

Such potential harms are often created by negligence. Property or business owner fail to make necessary repairs. Managers fail to ensure that crew members follow proper lockout and tagout procedures. Contractors take inappropriate shortcuts. Manufacturers do not follow best practices for assembling and inspecting products. In any of these scenarios, an injured victim or the family of an electrocuted individual could have grounds for filing a lawsuit.