A recent article in Reuters highlights a major challenge associated with the new texting while driving laws that have gone in effect in 19 states and the District of Columbia – teens simply ignore the law and continue to text and drive.

“Nobody is going to listen,” said Karen Cordova, a 17-year-old driver in Phoenix, Arizona (AZ) who openly admits she continues to text and drive even though it’s illegal in the city.

The lackadaisical attitude toward texting while driving probably isn’t relegated to the teens of Phoenix. Carrying around a cell phone and texting has become second nature to the next generation and the perception is that there’s nothing wrong with texting virtually anywhere and anytime.

Steve Block, a research associate with the Automobile Club of Southern California said that texting and using a cell phone have become a “component of life” for teenagers and it’s hard for them to “differentiate between doing something normal and doing something wrong.”

North Carolina (NC) recently introduced a statewide ban on texting while driving, though the punishment is a $100 fine and cannot be used to constitute negligence or contributory negligence by the driver in any action for recovery of damages in a lawsuit.  Basically, this means that if you were in a car accident and file a lawsuit alleging the driver that hit you was texting while driving, that claim alone cannot be used to argue negligence. Clearly, this law doesn’t exactly level the hammer on drivers who text and drive, especially if they wind up causing a car accident. 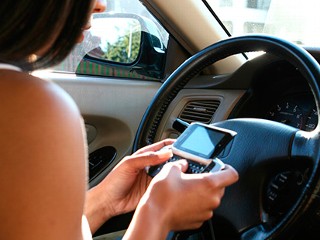 So what can be done to get teens to take these new texting laws seriously? Personally, I believe a nationwide ban needs to be implemented. The perception today is that a few states are restricting texting behind the wheel, but it’s not a serious infraction, so teen drivers don’t take the laws seriously. A nationwide ban would send a signal that texting and driving is a real safety concern.

I probably won’t win any popularity points with teen drivers after publishing this blog, but I’m fine with that. I care about their safety and don’t want to see anymore lives lost in horrible car wrecks due to texting and driving.