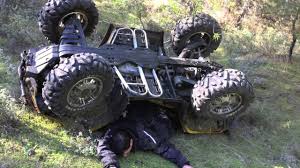 With the popularity of multiple types of ATV’s, often operated by teenagers and minors, come any increasingly large number of personal injuries, and accidental or wrongful deaths. As Virginia/Carolina personal injury lawyers handling vehicle accidents on a regular basis, we know that there are more safety measures that the manufacturers such as Suzuki, Yamaha, Honda, and others can take to prevent these rollover accidents. First of all, any three wheel ATV is a dangerous ATV.

According to Concerned Families for ATV Safety, 40,000 minors and teenagers are seriously injured or killed in ATV rollover accidents in the US.

One newspaper editorial sums up the issue with the title: “Too Young to Die, too Young to Ride?” Arguing that teenagers and minors do not have the decision-making of adults in their operation of ATV’s.

Besides state laws restricting the age at which an ATV can be operated, much of the safety must come from the manufacturers.

Here is some relevant data from the Concerned Families for ATV Safety website:

Which Is More dangerous: A Bicycle or an ATV?

There really is no comparison. To again cite the Concerned Families for ATV Safety website:

The Yamaha Rhino is one of the most unsafe ATV’s per one of my Injuryboard law blog colleague’s article:

The height of the Rhino combined with its narrow wheel base creates a high center of gravity, making the ATV prone to rollover accidents. Even when used at minimum speeds, the Rhino’s disproportionate design makes it a hazardous vehicle to operate or ride in. Unlike other ATVs, the Rhino rolls over during turns even at low speeds on flat surfaces because it is top heavy, narrow, and the tires are too small.

Also, the Rhino was subject of a recall in Spring, 2008.  The concerned family website also has many sad and tragic stories of parents who have lost their beloved teenage children forever due to death on an ATV, and other stories catalog minors suffering from coma and requiring care and medical attention for the rest of their lives.  Horrible but true.