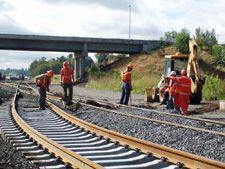 1889 was the first year in which data about railroad accidents and injuries was collected.  During that year 1,972 railroad workers lost their lives on the job which equates to one out of every 375 employees.  Last year there were 15 fatal railroad accidents that took the lives of employees.  The acting Chairman of the National Transportation Safety Board said, “All of these deaths were preventable” and that “When workers see a problem, the workers need to speak up and not continue until the problem is fixed.”

[Click here to get a free copy of our report, “A Railroad Worker’s Rights When Injured On the Job“]

The NTSB has now recommended more thorough safety briefings after an increase in the number of railroad and mass transit maintenance workers killed in accidents in the last four years. In one case last year, a railroad worker was electrocuted in Harpursville, N.Y., when a non-insulated aerial lift came in contact with electrical lines. Other railroad maintenance workers were killed by passing trains, one was killed by a mudslide and another died of heat stroke on a hot summer day.  NTSB staff investigators said more thorough daily pre-job briefings would help prevent these types of fatal railroad accidents.

Even if the NTSB’s recommended safety briefings are adopted there is still a culture of intimidation that injured works must face from the railroad companies. As Virginia (VA) railroad accident attorneys, we try to educate rail workers that the federal law called FELA (Federal Employer’s Liability Act) protects them from retribution for making a FELA claim. We pass out our blue books telling about FELA rights, so that workers can learn what to do if they get hurt on the job and what their rights are. The problem, is however much we explain workers’ rights at union meetings or when talking to railroad workers, the intimidation from the company officers and supervisors may feel more real especially to a younger railroader who doesn’t know the ropes yet.