Our Virginia motorcycle accident injury client suffered severe orthopedic injuries when a crash caused by a turning driver ejected him from his bike. The force of the collision sent the motorcycle rider flying for more than 15 feet. Slamming onto the pavement injured the motorcyclist’s shoulder, back and hands. 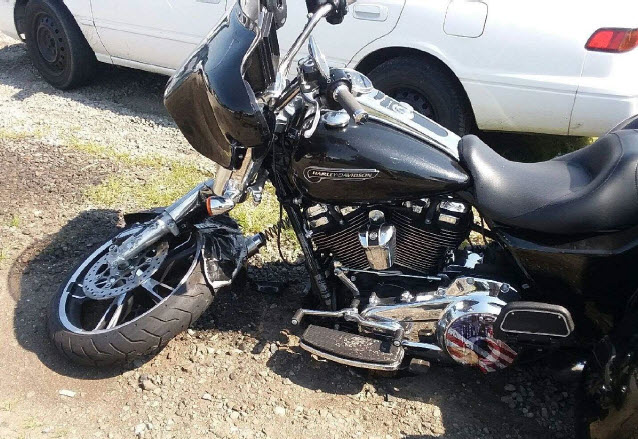 Our client’s right hand and thumb were particularly badly damaged, and he required reconstructive surgery. After several screws and plates were implanted, the man needed extensive therapy to regain full use of his right hand, which is the one he writes with.

Medical treatments and therapeutic interventions necessitated by the crash in September 2018 left our client with more than $50,000 in unpaid bills.

The injured motorcycle rider contacted our Virginia Beach-based personal injury law firm because the attorney he first hired was not giving his case the time and attention it deserved. Taking note of our long track record of securing fair settlements and winning trials for crash victims, and following a free consultation, the man entrusted his case to one of our partners, Eric Washburn. 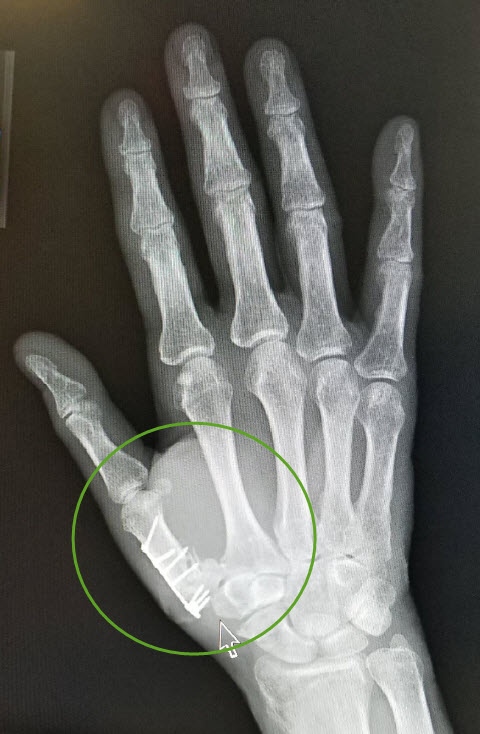 It was clear that the turning driver negligently and recklessly cut off the motorcycle rider, giving him no time to react or avoid the collision. It was also clear that the resulting injuries and medical expenses had turned the man’s life upside down.

Still, Washburn did not expect the at-fault driver’s car insurance company to settle the injured motorcycle rider’s claims quickly and for an amount that fully compensated him for his financial losses, temporary disability, and pain and suffering.

While preparing to take the case before a civil trial jury in circuit court, Washburn tracked down and interviewed several witnesses. The information they shared, as well as their agreements to testify in court, proved instrumental for countering the insurance company’s main line of defense. Based on the driver’s demonstrably false instance that our client had time to stop, insurance company representatives said they owed no compensation to a person who contributed to causing the crash. The eyewitnesses’ accounts overwhelmed the other driver’s accusation of contributory negligence.

An attempt to reach a mediated settlement failed, and Washburn proceeded to prepare for a trial. Shortly before court proceedings started, the insurance company finally offered a settlement our client could accept. The case concluded with the injured motorcyclist receiving $250,000.

Q: Eric, I understand you settled a motorcycle injury case for a client. What were the challenges you faced on this case?

A: Well, one of the challenges that we faced was that this client wanted to leave another lawyer. He was not happy with the representation he was receiving from this other law firm. As a result, he ended up going ahead and terminating their services and coming to our firm. He reviewed our website, our track record and our reputation. This combination led to him choosing our law firm to handle his case. 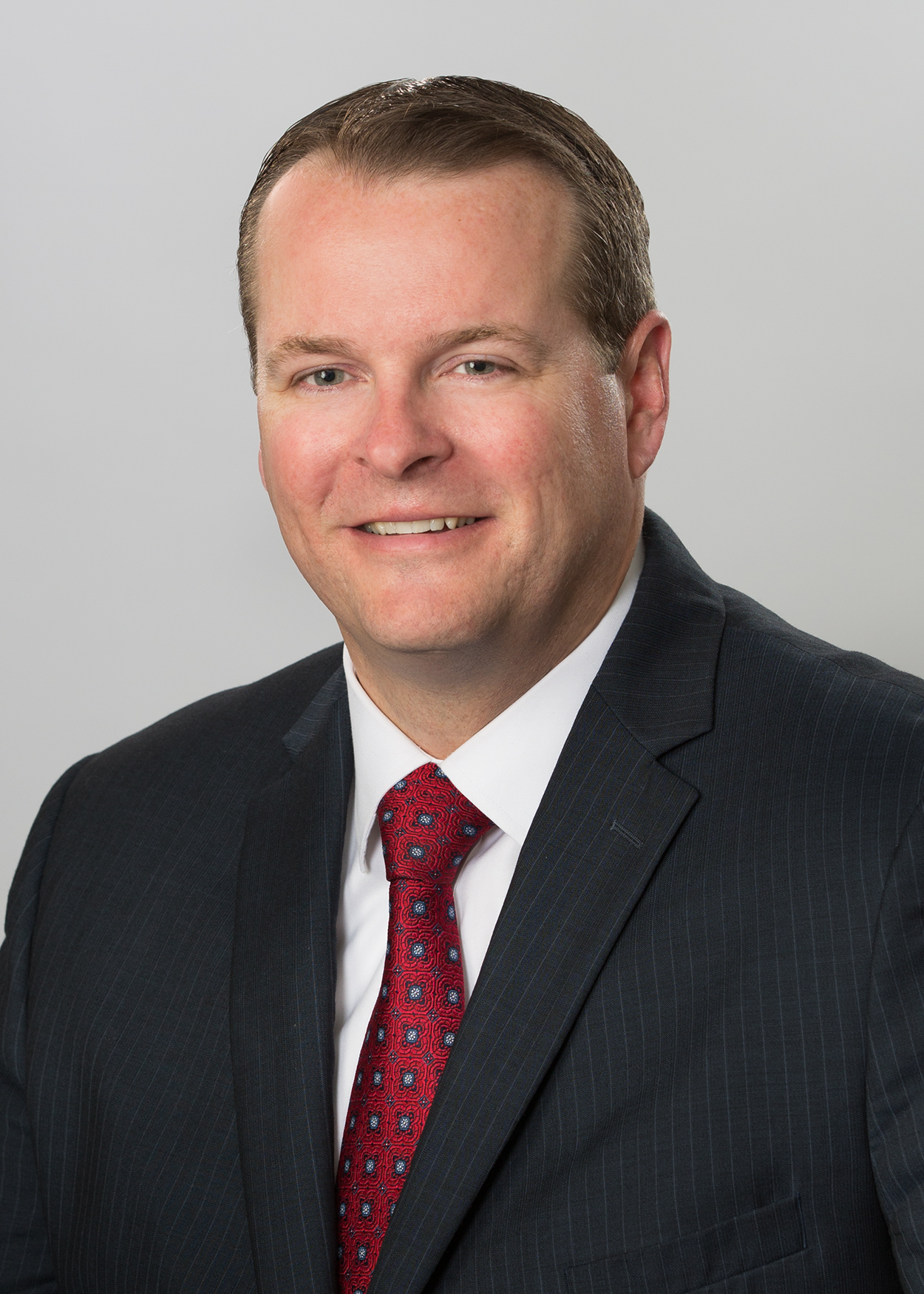 Q: What did he tell you he did not like about his prior attorney?

A: Well, he was concerned because they were not really moving the case forward. It had been a couple months. He was still in pain and they just weren’t providing him with much information as to what was going on, or what to expect moving forward.

Q: So, what were some of the strategies you engaged in to try to help him become convinced that you would move his case forward?

A: First, I told him that, based on his injuries, he endured a significant harms and losses from this accident. For example, his medical bills were tens of thousands of dollars and he was going to require long-term treatment.

Q: It seems like in almost every motorcycle accident case, insurance adjusters want to blame the motorcycle operator, even when they have done nothing wrong. Did you encounter that skepticism and pushback from the insurance company?

A: You’re exactly right. Right from the beginning, the insurance company’s attorney started laying the groundwork for blaming our client for just riding the motorcycle. In addition, the insurance attorney was going to try and argue that our client may have been going too fast and he should have avoided the accident because this other negligent driver cut in front of him.

Q: But what did the witnesses say that you interviewed?

A: Well, the witnesses that we interviewed were very adamant that our client had no way to avoid the collision and he was responsible for causing the accident.

Q: What were some of your client’s injuries?

A: Well, he ejected off his bicycle onto the hood of the other vehicle then landed on the pavement violently. As a result, he broke his clavicle, suffered an L3 fracture, suffered a Bennett’s fracture to his right hand, and so forth. It was a serious accident that left him severely injured and requiring surgery.

Q: How long was the rehabilitation from the surgery?

A: You are looking at a rehabilitation to get that movement back, the range of motion back in his hand. The estimated rehab is anywhere between 3 and 6 months.

Q: So, what key strategies did you employ once it was in the lawsuit process?

A: Once we filed the complaint, we again reached out to the eyewitnesses. We conducted depositions of the other driver, our client, along with other forms of pretrial discovery. We also engaged in mediation with the insurance company.

Q: What is mediation?

A: Mediation is when both parties come together to see if there is a way to resolve the case without going to trial. Basically, a retired judge or mediator will come in and kind of go to both sides and see if there is a viable middle ground to resolve the case. Unfortunately, the insurance company was not open to properly compensating our client during the mediation process.

Q: So, how did you finally get the case settled?

A: We finally got the case settled as we were preparing probably about a month, maybe a month and a half out from trial. We let them know that we were going to call two eyewitnesses that we formally reached out after the accident who confirmed that our client was not at fault for the accident. Eventually, the insurance company came around and offered a reasonable number that our client was happy to accept.

Q: And was your client satisfied with the settlement?

A: Absolutely. He was ecstatic.