Our Virginia car accident injury client required multiple surgeries and remained hospitalized for months following a T-bone crash on Virginia’s Eastern Shore. The crash happened at the intersection of State Route 180 and State Route 600 in Accomack County on the evening of July 10, 2014. 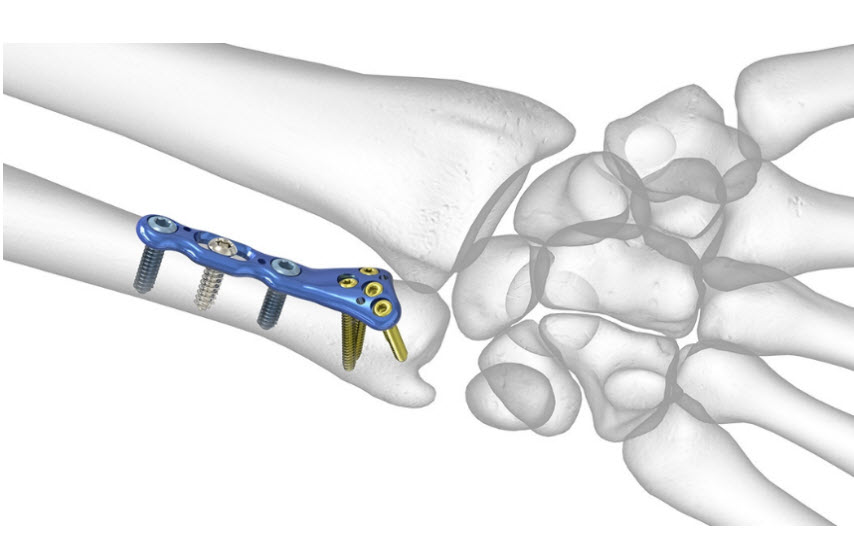 The man, who lived in Kentucky but was visiting his family’s vacation property, was a passenger in the front seat of his daughter’s car when the teenaged driver of pickup truck ran a stop sign and slammed into the passenger side of our client’s vehicle. The collision occurred with such force that the car went airborne and landed in a cornfield beside the highway.

Our client was transported to Sentara Norfolk General Hospital with a shattered bone in his forearm, a dislocated right femur and fractures to his femur. Surgeons repaired our client’s ulna via a procedure known as an open reduction and internal fixation (see the graphic to the left).

Resetting the man’s femur in its hip socket and repairing the leg bone also required major surgery. A post-surgery infection kept the man in the Norfolk hospital and hooked to a vacuum device that continuously drained his wound.

When he was deemed healthy enough, doctors transferred our client to the Riverside Shore Rehabilitation Center on the Eastern Shore, which is near his family’s property. Months of physical therapy enabled our client to stand and walk short distances, but his chances for regaining full mobility were considered low.

By the time the man was able to return to his home in Kentucky, he had accumulated around $100,000 in medical expenses. He also faced more rehab and a lifetime of partial disability.

The teenager’s car insurance company did not contest its policyholder’s fault and offered to settle our Virginia car accident injury client’s claims without going to court. Unfortunately, the young driver carried only $50,000 in liability coverage.

When we learned that both our client and his daughter carried underinsured motorist coverage, we filed claims with those two policies. We eventually found it necessary to threaten civil lawsuits in Kentucky, but the insurers for the injured car passenger and his daughter did finally agree to negotiate settlements.

Our Virginia car accident injury client received a total of $300,000 in settlements from the three available insurance policies. We also helped the man and his wife work with hospitals, health insurance plans and debt collectors to reduce the amount of unpaid medical bills.