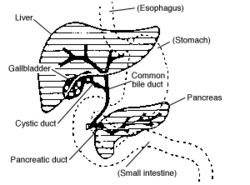 If you’re reading this page, it’s likely you or a loved one suffered a serious injury related to a clipped or nicked bile duct. I’ve been practicing medical malpractice law in Virginia for decades and this a very common type of medical negligence and the consequences for the patient can be severe.

A cut bile duct can lead to jaundice, intense stomach pain, cholangitis (i.e., an infection of the bile ducts) and even loss of life if the cut is left untreated for an extended period. Serious injuries and side effects occur from a clipped bile duct because your bile duct system and gallbladder, which are collectively known as the biliary tree, are involved in the drainage and delivery of bile from the liver into the intestine. The bile duct has an extrahepatic portion outside the liver and an intrapancreatic portion within the pancreas, which means there are plenty of opportunities for a careless doctor or surgeon to nick, cut, or clip the bile duct during a surgical procedure.

Bile production is one of the most vital functions of the liver, and it is essential for the proper absorption of nutrients from the intestine, according to the University of Southern California Department of Surgery. When a doctor cuts the bile duct, this causes bile to seep out into the inured patient’s bloodstream. This is when the horrific side effects mentioned above start to become apparent.

When does a cut or nick of the bile duct occur?

A cut or nicked bile duct routinely occurs when a doctor or surgeon attempts to conduct a laparoscopic gallbladder surgery. This type of surgery is performed on more than half a million people each year because it is less-invasive than a traditional procedure and permits most patients to return home within 24 hours of the operation. When a bile duct is clipped during a laparoscopic gallbladder surgery, a patient may not immediately notice the injury until a few hours later when they egin experiencing excruciating pain. The risk of death associated with a cut bile duct routinely depends on the severity of the cut and the time a medical team takes to recognze and resolve the injury.

Even if a patient gets the injury treated quickly, the intense pain caused by a cut or nicked bile duct can cause a person to spend days or weeks in the hospital recovering. Some patients are never the same after suffering the surgical injury.

Why you should speak to a medical malpractice attorney

If you or a loved one suffered a cut bile duct injury, consult with a medical malpractice lawyer. You may have grounds to pursue a medical negligence claim. Filing a claim will enable you to pursue monetary restitution to cover your medical bills and to compensate you for the pain and suffering associated with the traumatic event.

To learn more about clipped bile duct injuries, take a look at our free consumer guide discussing the top 5 surgical errors. The guide was written by a Virginia medical malpractice lawyer who has handled those types of cases for more than 30 years.